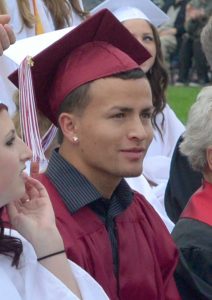 Michael (Micol) Woodiel photographed at Berthoud High School commencement on May 23, 2015.
The Surveyor

Berthoud High School graduate Michael (Micol) Woodiel, 19, was killed in a car accident in the early hours of Aug. 21.

The accident occurred on Storm Mountain Drive west of Loveland in the Big Thompson Canyon, according to the Colorado State Patrol.

The 1991 Chevrolet Suburban believed to have been driven by Hunter Linderman, 18, of Loveland, was traveling east on Storm Mountain Drive at 8:30 a.m. Friday morning when the vehicle entered a right hand curve in the road going too fast and lost control, CSP Trooper Nate Reid said in a written email response to the Berthoud Weekly Surveyor. The Suburban spun clockwise then over corrected back into a counter-clockwise rotation before leaving the roadway on the left side. The vehicle then hit a large boulder and tree and rolled one quarter times onto its passenger side.

Woodiel was partially ejected and trapped under the vehicle, according to Trooper Reid.

According to Trooper Reid, six people were in the vehicle at the time of the accident; however, Woodiel was the only fatality.

Linderman was arrested and booked in the Larimer County Jail and was due in court Monday morning for advisement. One other passenger, a 17-year-old Berthoud male, was reported to have sustained minor injuries and was taken to McKee Medical Center in Loveland for treatment. There was no information on the 17 year old’s condition Monday.

The official accident report wasn’t available Monday as the investigation continues. Trooper Reid said that alcohol, drugs, and excessive speed are being investigated as a contributing factors in the accident. 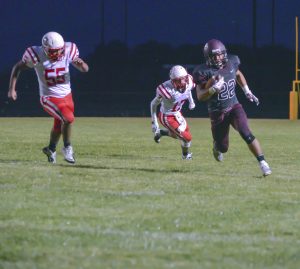 Woodiel graduated from Berthoud High School in 2015. He played varsity football and competed in several events in Track and Field in the spring.

An outpouring of shocked friends and community members inundated Facebook over the weekend and Monday morning as news of Woodiel’s passing circulated.

“[Micol] truly was a caring, loving, and simply compassionate young man. We will miss his smile,” read one comment.