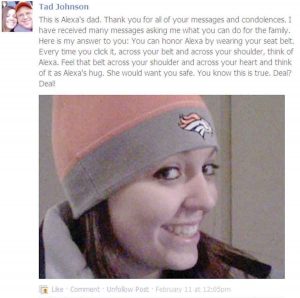 When winning a prize like the Seat Belt Challenge, the money isn’t the best reward – life is.

When Tad Johnson visited Berthoud High School on March 24 as part of an assembly for the Alex Sabados Day of Kindness, he presented the Berthoud students with a unique challenge. Johnson challenged each of the Thompson School District high schools to encourage their peers to buckle up, and the school with the highest rate of drivers and passengers that demonstrated vehicle safety could potentially win $1,500.

“It’s yours to win,” Johnson told the crowd of students in the stands in the school’s gymnasium. “One school could win and sweep it all.”

Johnson started Alexa’s Hugs, a not-for-profit organization aimed at increasing seat belt and vehicle safety awareness for high school kids. Johnson and his wife, Jona Johnson, started Alexa’s Hugs after losing his oldest daughter, and Jona’s stepdaughter, 19-year-old Alexa Johnson, a 2012 Loveland High graduate, in an accident only nine months after she graduated. Alexa lost control of her truck on Interstate 25, just east of Berthoud, and was ejected from the vehicle. She wasn’t wearing a seat belt and that is the message that the Johnsons are spreading.

“Nothing says I care about you more, and I want you to be safe, than ‘please buckle up,’” Tad said.

Last fall, Tad and representatives from Alexa’s Hugs visited each of the district high schools (Berthoud, Thompson Valley, Loveland, and Mountain View) and tracked the number of kids, and adults, who left the parking lot with, or without, wearing a seat belt.

“Out of the four schools, you guys were our worst offenders,” Tad told the crowd at that March assembly.

The Berthoud High School students decided to sweep all three categories and take home the $1,500.

Assistant Principal, Chase McBride, said that he wasn’t surprised by the outcome.

“I just knew what kind of kids we have, how determined and motivated they are and I just presented them with the challenge and they are the kind of group that could pull it off,” McBride said. “It was a proud moment.”

While all four schools showed improvement in seat belt use, Berthoud students increased their seat belt usage nearly 17 percent, ending up at 84 percent of drivers and passengers using seat belts.

“I was overjoyed,” Tad said. “I was encouraged that all four schools’ numbers went up.”

Both the fall and spring observations were unannounced and anonymous, Tad said. Counters were used to keep track of each passenger who wore a seat belt and another counter was used for each passenger who was not wearing one. If a passenger couldn’t be determined to be using one, or not, the passenger wasn’t included, Johnson said.

Tad said that the important thing is that the kids are hearing the message.

“I spend most of my days banging my head against the wall, asking if anyone is listening,” he said.

But the Berthoud students responded in a way that lets the Johnsons know that their message was heard.

“They told us that this isn’t just a contest for them,” Tad said. “Their message was, ‘this is our community and these are our classmates.’”

For more information on Alexa’s Hugs, or to make a donation to the organization visit, www.alexahugs.com.