HGTV filming new season of Rock the Block in Berthoud

If you live in Berthoud, Colorado you already know what a spectacular place we get to call home. According to a post on HGTV.com the home improvement and real estate network decided it was a pretty phenomenal place too and is filming one of their popular shows “Rock the Block” here in our Front Range community. 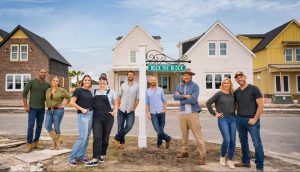 Photo courtesy of HGTV – The cast of season 3 of “Rock the Block.” The show is hosted by Ty Pennington, and will return to HGTV for a fourth season that is being filmed in Berthoud. The new season premieres March 2023.

It will be the fourth season for the renovation competition series that attracted more than 14 million viewers to its previous season, and according to HGTV will be the “baddest one yet.”

Hosted by well-known carpenter, craftsman and design expert Ty Pennington, the competition will feature the highest number of teams in the show’s history, four to be exact, comprised of HGTV’s experts as they face off in a renovation battle for bragging rights and a street named in their honor.

Each team has six weeks and a budget of $250,000 to renovate identical properties located in Heron Lakes, a Hillside Commercial Group community in northwest Berthoud. The homes are being built by Landmark Homes.

The new six-episode season is slated to premiere in March 2023.

If you want to get acquainted with the show or rewatch episodes you can stream the first three seasons of “Rock the Block” on discovery+.