When Paul Schumacher’s late father-in-law kept telling and retelling stories about his life and the Second World War, the Berthoud author wanted to retell them in his own story. 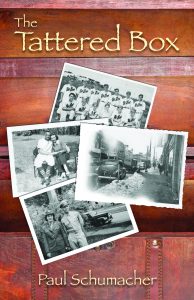 Schumacher wrote “The Tattered Box” over 3 ½ years, publishing it in December 2016, to tie together the stories of Arlis Kuess through the device of a timeworn box.

In the 259-page novel, 18-year-old John receives the box as a gift from his elderly grandfather, Bill, filled with items from Bill’s past that triggers layers of storytelling.

“He was a very funny guy and a great storyteller, so I started capturing some of the stories he told, and as I started writing some of those down, it occurred to me I could start piecing them into novel,” Schumacher said. “Most of them were stories that were quite funny. He was a pretty hilarious guy. … But then there were also some darker stories.”

Schumacher got the idea for the novel when his oldest of three sons, Joshua, now 18, said the day after Kuess died in December 2012, “Wouldn’t it be cool if I could go back in time and hang out with grandpa?” He’d said he thought they’d be the best of friends.

Schumacher immediately began working on the novel the next month, writing in the mornings and during weekend writing retreats. He set the novel in Wisconsin, where he grew up and Arlis had lived for several years, in a fictional town called Waterville, based on a small town named Watertown. The dozen or so stories within the novel touch on Arlis’s playing baseball and serving in the war as a Seabee in a construction battalion for the U.S. Navy.

The novel begins with John playing baseball and getting hit in the head with a baseball, which sends him back in time to 1941 to discover what the items in the box mean. He and Bill are both 18, becoming fast friends; playing baseball, going to school together, and going on a double date, later getting enlisted and going off to war. John originally had not been “appreciative of his grandfather and his regurgitated stories,” until he time traveled, Schumacher said.

“To John, it seems like his grandpa tells his stories over and over again,” Schumacher said. “When he travels back, he learns to appreciate his grandpa, and actually he calls him his best friend.”

Schumacher’s friend Stephanie Gregg of Berthoud read the book with three girlfriends who live across the country, and she met up with them in January to discuss the book during a trip at Lake Franklin in Minnesota. 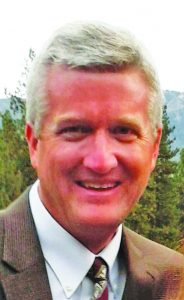 “It was easy to read, a kind of historical, war-period drama,” Gregg said. “I like the going-back-in-time element to it. I liked the different relationships that were developed, especially between a boy and his grandfather, which later was a boy and his friend. … There were just a lot of nuances that I enjoyed.”

Debra Wykoff of Berthoud also read the book and is a member of the same writers group as Schumacher, the Berthoud Community Library Writers Group that meets Mondays at the library.

“I really liked his retelling family stories, and that way everyone in the family will be able to hear those stories even if they don’t know the grandpa,” Wykoff said. “He does a good job of narrating the voice of a teenage boy … writing the narrative the way a teenage boy would talk. … He makes some good points about how it feels to talk to a girl that you like, how it feels to lose your parent or have problems at home.”

Schumacher is working on his second novel, with the working title, “I Wish I Had Known,” about an 18-year-old man seeking redemption for committing a crime after his father died. The novel is told from many points-of-view as the man’s son finds letters in the attic written by many people to introduce the boy to the father he never met.

“I love the clean slate part of it, where I can essentially write whatever I want, and I can take the story in whatever direction I want it to go. … It’s kind of a nice escape. I can get lost in a story,” Schumacher said. “I also enjoy the editing part of it, the refinement process of going from a questionable first draft to a real quality final product.”

“Writing is a very creative process, and it also has infinite solutions if you think about it as a problem to solve,” Schumacher said. “There’s infinite ways you can take the story. Engineering work does have a small possible set of solutions, but they both require creativity.”

In 2010 Schumacher and his wife Gail, and their sons, along with Arlis, moved to Berthoud for Schumacher’s current job, which is in Longmont. They had come to Colorado for a vacation, and Schumacher immediately asked to be transferred, he said.

“We drove right through here,” Schumacher said about Berthoud. “As soon as I saw all the big trees, it struck me I have to live here. … I kind of fell in love with the town.”