A few Berthoud High School (BHS) students want the public to remember the sacrifices made by their fellow students, not just on Memorial and Veterans days, but every day of the year. 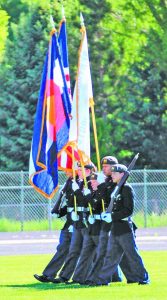 Photo by Tiffany Rafferty – The Junior Reserve Officers’ Training Corps at Berthoud High School presents the colors during the school’s graduation ceremony May 26. The JROTC will place a memorial to the school’s fallen soldiers at the entrance of the school in November.

The Junior Reserve Officers’ Training Corps (JROTC) will place a memorial to honor and remember BHS students who died in the line of duty at the school’s entrance on Nov. 12, the day after Veterans Day 2018. According to the JROTC, such a memorial does not exist in Berthoud, and the JROTC students are currently raising funds for their service learning project.

“Since it will be a stone memorial with the names engraved, it will be a permanent thing at the school and everyone will be able to see it, the names of the people who made the ultimate sacrifice,” said JROTC Capt. Naomi Heavilin, 16, a rising senior at BHS and team leader for the project. “We want to find a way to honor these people, because their sacrifices should never be forgotten.”

The memorial, called “Bringing Home Berthoud’s Fallen Graduates,” will consist of a plaque with the names of the fallen soldiers who attended BHS, going all the way back to 1908 when the school was established.

It will be made out of granite, with the image of a flag above Colorado’s snow-capped mountains and above that, the words, “In memory of those Berthoud High School graduates who made the ultimate sacrifice so that we may enjoy our freedom.” Bracketing the flag will be two battlefield crosses, consisting of soldier’s boots with rifles inside, topped with Spartan feathers, the school’s mascot.

“The Spartan helmets will really make it stand out,” said retired Sgt. Major Harold “AJ” Johnson, JROTC instructor for Berthoud and Loveland high schools. “It’s very important to not only honor our fallen, but it will give the kids a chance to connect the past with the present. … They’ll actually see the names of the fallen.”

On either side of the flag will be the soldiers’ names, which the JROTC is researching to identify. The students are compiling the names by comparing the school’s yearbooks, which go back to 1924, with the national archives list of fallen soldiers from Larimer County.

So far the students have found eight names, starting with two recent graduates, Army Staff Sgt. Justin Bauer, a civilian firefighter and a military paratrooper who died in combat Jan. 10, 2009, in Iraq, and Spc. Gabriel Conde, who died April 30 in a combat operation in eastern Afghanistan.

“We wanted to do this project because they have a small memorial for Justin Bauer. We wanted one with all the names,” said JROTC Sgt. 1st Class L.T. Torres, 16, a rising junior at BHS serving as the main researcher on the project. “We figured a plaque would be the most memorable and would last the longest.”

Torres likes being able to memorialize the fallen, especially those from long ago.

“Back then maybe they didn’t get a lot of recognition for what they did,” Torres said. “It feels good to pull up those names and have them placed on a memorial.”

The memorial will be installed Nov. 12, the day after Veterans Day, following the school’s Flag Burning Ceremony that serves as an honor to veterans and a service to the community, when Boy Scout Troop 6 in Berthoud retires old American flags. Also in attendance will be American Legion Post 67 in Berthoud.

The installation will be to the left of the school’s main entrance in a gravel area with enough space for a bench and other memorial items that future JROTC students, along with school clubs and the student council, will be encouraged to provide. The bench, which is next on the project list, will be a place to sit and memorialize those listed on the plaque and others who died in service to the county.

“We want to make sure people remember them, particularly the ones that have passed a long time ago,” said Christine Torres, BHS Athletics Booster Club president, whose son is L.T. “It’s important to be reminded every day of the sacrifices folks make to allow us these freedoms.” 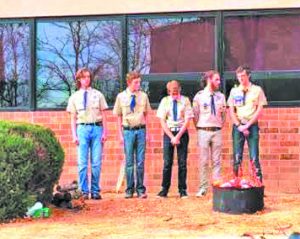 The memorial also is for the families of the fallen. “I’m very thankful for them to have a place to go to feel remembered and honored,” she said. “I am thankful they have a place to reflect on those who passed. … They have a sacred place they feel is theirs in Berthoud.”

Another group of BHS JROTC students is creating a second plaque, still in the initial phases, for their service learning project. The plaque, which will be on the right of the entrance, is three-sided with quotes on each side to celebrate those BHS students who died early and did not realize their dreams. It will not have any names on it.

“We’ve had so much loss down at Berthoud High School. It gives the kids something, not to memorialize those who have taken their lives, it’s just a tribute to the lives they lived and for the dreams not realized,” Johnson said. “It’s not a memorial. It’s a tribute to their lives.”

The tribute is called “Set in Stone” and is India red granite. That project will cost $2,500 and ideally will be finished by fall or spring.

For the memorial project, the JROTC needs to raise another $1,600 and have raised $650 so far through several fundraising activities. The students also are seeking donations from local businesses and the community. They began their fundraising efforts in November 2017.