Changes coming to the Weedin Agency 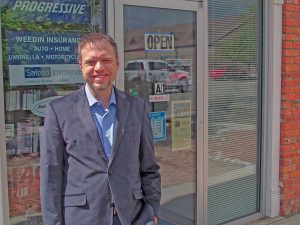 The sign behind Eric Weedin says the insurance agency is open, but this will change in mid-July when the Weedin Agency’s Berthoud offi ce will close. The agency will operate in the area but out of the agency’s Loveland office.
Bob McDonnell / The Surveyor

The Weedin Agency will close its Berthoud office at the end of the year, according to Eric Weedin.

But he doesn’t see the closure as a negative move.

Weedin added that combining all the insurance operations of the family-owned business at the Loveland location (1601 E. Eisenhower Blvd.) is a matter of efficiency.

“With technology, the physical location matters less and less,” Weedin pointed out. Weedin labeled the business as an “old fashioned agency,” saying he will still meet with clients in Berthoud–if they wish. He assured people the business will make certain clients have what they need.

Despite the Berthoud office closure, Weedin sees continued growth for the business. He said the six people in the Loveland office, along with him, can all help people when they come in.

In 1999 Bob Whalen started the office in Berthoud, with Weedin taking over in 2002. The company’s history goes back much farther, however, with Weedin’s grandfather starting the business in Loveland in 1956. Investigating the history of the business, Weedin found the roots go back 101 years in Loveland.

One of the downsides of the transition is that Weedin knows he will not see his Berthoud friends quite as often. He enjoyed running into people when he walked to lunch or the Berthoud Post Office.

Weedin quickly pointed out that he is not leaving Berthoud completely.

“I want to be an important part of the Berthoud community,” he said, even after the closure of the office at the end of July.

Weedin recently joined the resurrected Berthoud Lion’s Club and participation in the Berthoud Area Chamber of Commerce will continue after Weedin closes the office doors.

“Berthoud has been an important part of our success,” he said.

Weedin will remain at the 235 Welch Ave. office in Berthoud until mid-summer. The 532-3131 telephone number will remain active for the foreseeable future.