By Jan Dowker
The Surveyor 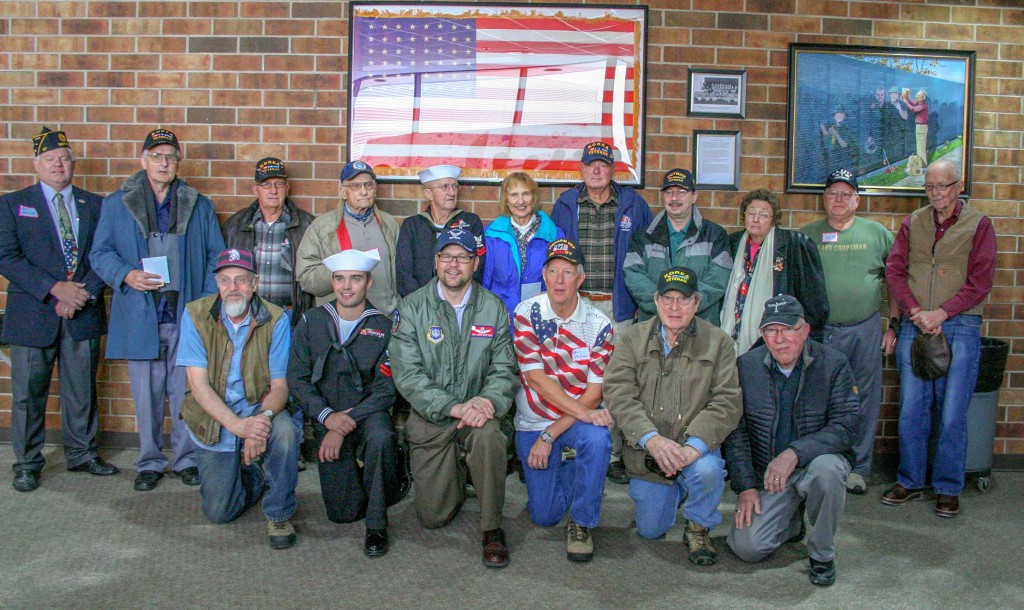 All the veterans in attendance posed for a photo outside of the Berthoud High School auditorium after the recognition ceremony on Nov. 11.
Jan Dowker / The Surveyor

In a time-honored tradition, recognition of the sacrifices that our veterans have made is celebrated throughout the country on Nov. 11. Historically, dating back to World War I, when an armistice to cease hostilities went into effect on the 11th hour of the 11th day of the 11th month of 1918, this observance by our communities to honor America’s veterans for their service to our country has continued, almost 100 years later.

On Nov. 6, the American Legion Justin Bauer Memorial Post 67 and the American Legion Auxiliary Unit 67 held its annual Veterans Day dinner and auction with much of the proceeds helping to provide support for local military men and women serving here and abroad, and their families. 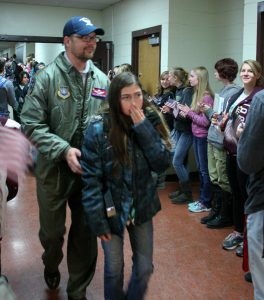 “We made over $1,600 dollars on the auction, with the proceeds going to several programs to benefit the vets and active duty military,” shared Auxiliary President Laurel Downer.

According to Downer, there were more than 100 guests in attendance this year, making it the biggest Veterans Day dinner held by the Berthoud Legion.

“Ralph spoke about the issues regarding the VA and that some veterans had died before they could get in (to see a doctor),” said Paul Talafuse, Post 67 commander. “It’s better now, and we devote a lot of time to helping disabled veterans get their benefits.
“The American Legion can help veterans navigate the bureaucracy to get their benefits and get the help they need.”

During the dinner program, three Berthoud High School (BHS) students gave presentations on their experience at this past
summer’s Colorado Girls State. Those students were Kiah Leonard, Lauren Mesikapp, and Shelby Eason.

“It was the first time the auxiliary had sent BHS students to Girls State, and they did a great job in their presentations,” said Downer. “We couldn’t be more proud of them.”

The dinner’s success was due to a group effort, according to Downer.

“The men did a lot of ticket sales for the dinner, including the driving force of Paul Talafuse, Jerry Morlan and Duane Pond,” she said.

“There were a number of ladies that really helped make this a successful night,” said Talafuse.

Downer shared that the dinner pricing by Origins Catering and Brookside Gardens venue allowed a lower ticket price for veterans and family members to attend. Another popular item during the evening was the fire truck brought in by ABC Storage.

“The dinner was very good and Brookside Gardens was very nice and gave us the space we needed,” said American Legion member Jerry Morlan. “The ladies auxiliary did a really fine job. I heard a lot of good things about the dinner. It was a good fundraiser for us.” 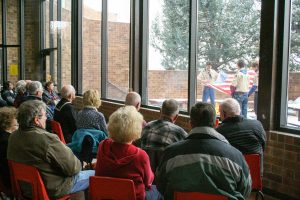 Berthoud High School Principal Chris Garcia had students welcome Veterans at the front entrance of the school, and had them sign in then be seated near the windows of the BHS Commons to watch a flag retirement ceremony performed by four members of Boy Scout Troop 6.
Jan Dowker / The Surveyor

According to Downer, the money raised from the auction will be used by the auxiliary for Veteran’s Services, including shipping costs for care packages for active duty military members that will be sent out the first week of December, and the Hearts & Horses for Heroes Program, among others.

The Legion raised money from the sale of tickets to the dinner. “We had a young man attend the dinner who wants to go to Boys State, so some of the money will go for that,” said Talafuse. “About half of the [Legion’s] money goes to local youth, and we’ll be rehabbing the Lions Club to get it prepped as our permanent home. We’ll have a lot of events that we’ll host there to help build awareness of the American Legion.”

“I’m excited for next year,” said Downer of the annual event. “We want to make it even bigger and better.”

“Yes, we look forward to making next year even bigger,” agreed Talafuse.

As we recognize our veterans and the sacrifices made by so many since that fateful Nov. 11, 1918, the tradition of honor continues with the growing recognition and support of veterans, just as they fought for our freedoms that we all hold dear.

The recognition continued on Veterans Day with the auxiliary and Berthoud High School hosting a celebration to honor veterans from the Berthoud area and in the Thompson School District.

A flag retirement ceremony outdoors was followed by a program in the auditorium. Berthoud High School’s Bridge Between Show Choir sang the National Anthem, with the high school band. Presentations by school administrators and students to the guest veterans were capped with refreshments provided by auxiliary members.

All of the Berthoud schools participated, saying thank you to the vets; some through banners posted at the schools, and others with kids holding signs of thanks along the route to the high school.

On Thursday, Dec. 11, the American Legion will open the Lions Club from 6-8 p.m., at which time the Legion will begin rehabilitation of the building.

“Anyone can drop by or say hello,” said Talafuse. “We’re doing a canned food drive that will be delivered following Christmas to ensure that families are fed into the New Year, so we welcome any support for our food drive.”
For further questions of the American Legion please call Paul Talafuse at 970.692.1926.