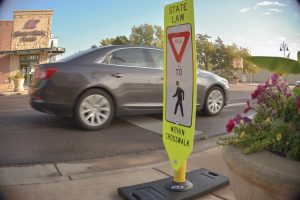 Local officals are working with the Colorado Department of Transportation to place additional “Yield
to pedestrian” signs at several intersections along Mountain Avenue in Berthoud. CDOT officials
say the signs should be in place in December.
John Gardner / The Surveyor

Crosswalks along Mountain Avenue may become a little safer now that a plan is in place to improve the crosswalks with crossing signs and signals at several intersections. “We’ve tried to work on the crosswalk issues since we’ve been here,” said Sergeant Jim Anderson.

For the last 18 months, Anderson has identified an issue with increasing motor-vehicle traffic as well as foot traffic on Mountain Avenue. With only two major stoplights with flashing crosswalk signs, Anderson, along with town staff, feels the other intersections in downtown Berthoud have become safety issues. Town residents have even voiced their concerns as well at a recent town board meeting on Aug. 12.

“There were concerns brought up by citizens about pedestrian safety along Mountain Avenue. The town board, in turn, asked staff to look into the issue,” said Trustee Suzie White. “Sgt. Anderson was most helpful with this and was instrumental in getting the signals/signs to improve pedestrian safety.”

The main area of concern is the intersection of Third Street and Mountain Avenue where traffic has been observed to increase in speed and not slow down for those crossing the street.

“I’ve seen a couple of close calls,” said Anderson, “We want to try to avoid those close calls.”

Anderson added that especially as population increases, it is necessary to begin addressing these issues now in order to prevent dangerous incidents from occurring in the future.

“I was concerned about this issue because of the children that this could possibly affect, as well as adults, crossing a busy road. So I did bring up the idea of the signals at the board meeting,” said White.

Another issue Anderson is addressing is jaywalking. He has observed people frequently crossing Mountain Avenue not at a crosswalk. “My main concern is pedestrians getting hit. You are not covered by the law if you do not cross at a crosswalk,” said Anderson. The addition of better crosswalks, he hopes, will help with this problem.

On Sept. 15 a discussion was held between town representatives and Anderson in order to proceed with resolving the issue by possibly bringing flashing signals to the crosswalks along Mountain Avenue.

“One of the most useful items is the signal that flashes when a button is pushed by a pedestrian. It is very visible to vehicles. I have seen them in other towns and I think they are a very useful tool for safety,” said White.

Because Mountain Avenue from Interstate 25 west to 287 is a state highway, all adjustments and changes to this stretch have to be approved through the Colorado Department of Transportation (CDOT). Having to go through another source for these alterations has delayed the necessary changes, but is now being addressed. Currently no flashing signs will be installed, as Anderson is trying to address the issue “a piece at a time,” he said. However, he would like to pursue use of the flashing signs when budgeting allows.

“[It’s] for me to have a little more control, to hold people accountable,” said Anderson.

At this point in time, Anderson has started the process of procuring several “yield to pedestrians in crosswalk” signs from CDOT, which they have approved.

According to CDOT spokesman Jared Fiel, CDOT has approved “regular” pedestrian signs that will be placed at the other intersections along Mountain Avenue this December, possibly sooner. The signs will cost about $1,000 and the money will come from the CDOT transportation division, Fiel said.

The signs will be strategically placed on every block along Mountain Avenue between Third and Eighth streets.

Other existing traffic concerns being addressed by Anderson include an update of school-zone flashing lights, particularly by A&W. He states these will eventually need to be updated to two flashing lights instead of one. Also being considered is the possibility of adding school-zone lights to Berthoud High School and Turner Middle School traffic. In October the new Turner Middle School resource officer will be charged with resolving school traffic issues at Fifth and Eighth streets as well.