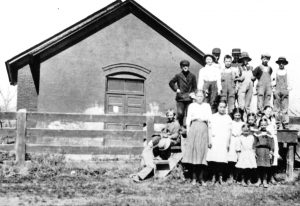 Photo courtesy of Fort Collins Public Library – The Old Berthoud School (still standing) is located on the south bank of the Little Thompson River near the site of the original Berthoud settlement. The school was attended by first through eighth grade students living in the rural area south of Berthoud.

From the 1914-15 through the 1917-18 school years J.M. Long and Ivy Stockwell were the teachers at the Old Berthoud School. In the two-room, brick country school building Long taught the upper grades (5-8) while Stockwell instructed lower class levels (1-4). Since both teachers lived in the town of Berthoud, they walked along the railroad tracks to and from the school that was located a stone’s throw west of the tracks 1 mile south of town.

The photograph that accompanies this article shows the Old Berthoud School (still standing) a few years before James Long and Ivy Stockwell began teaching there in 1914.

When the fledgling settlement of Berthoud was moved from its original site on the Little Thompson River bottom in the winter of 1883-84, the location of the original settlement became known as “Old Berthoud.” Since a one-room, brick school building had been constructed at the original settlement one year earlier it remained in use as a country school and became known as the Old Berthoud School. The school was open until the 1950s when the consolidation of school districts compelled all of the Berthoud area’s rural students to attend classes in town.

When J.M. Long and Ivy Stockwell taught at the Old Berthoud School in the 1910s the building had been enlarged to two rooms. A large “cloak room” was also added to the front (east) entrance of the school building.

James M. Long along with his wife Maud arrived in Berthoud in 1914. They made their residence in a house on West Welch Avenue where they lived the remainder of their lives. The address of the house where the Longs lived is not presently known.

When Long came to Berthoud in 1914 he was 46 years old. A native of Iowa, Long had attended seminary and Dubuque College before embarking on a career as an educator. He followed the teaching profession until ill health forced his retirement in 1921. He died three years later in 1924 and was laid to rest in Berthoud’s Greenlawn Cemetery.

For four years Long’s teaching companion and the instructor of the “lower grades” at the Old Berthoud School was Ivy Stockwell. Miss Stockwell had been born on her father’s ranch east of present-day Campion in 1892. She graduated in a class of nine students from Berthoud High School in 1912. When she took the teaching job at Old Berthoud, Ivy was a two-year veteran of teaching in the primary department at Whipple country school 2 miles east of Berthoud.

Beginning in the 1918-19 school year Ivy Stockwell moved to Berthoud’s “town school” where she taught through the 1962-62 school term. When a new Berthoud Junior-Senior High School building (no longer standing) was opened to students at eighth Street and Massachusetts Avenue in 1921, the school where Miss Stockwell taught in present-day Fickel Park was named Berthoud Elementary.

Beginning in the fall of 1914 each weekday morning Ivy Stockwell left her home at 906 Fourth Street and walked several blocks south to Welch Avenue. At the intersection of Fourth Street and Welch Avenue she met colleague J.M. Long and together they followed the Colorado & Southern Railroad tracks out of town south to the Old Berthoud School. Their commute was far easier than most of their country school counterparts who lodged with families in the school districts where they taught. Others lived in the Berthoud area and commuted to work in horse-drawn buggies. Salaries of teachers in the 1910s were generally too meager to permit them to purchase automobiles.