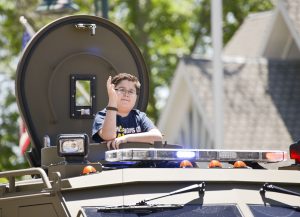 Berthoud Day was extra-special for Donovan Esparza, one local middle-schooler who just finished the sixth grade at Turner Middle School (TMS). Esparza was at the center of all the action during the Berthoud Day Parade, and at the park, as the honorary SWAT kid with the Northern Colorado Regional SWAT Team.

TMS resource officer and LCSO deputy, Kevin Kingston, explained the way Esparza received this honor came from Kingston’s supervisor, Lieutenant Ian Stewart, who asked if Kingston could find a TMS student to be part of the Berthoud Day parade. Kingston said they were looking for a student who makes TMS a better place. Kingston said Esparza is extremely helpful at school. One example cited by Kingston is Esparza’s willingness to make new students feel welcome. 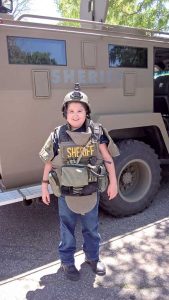 Kingston met with the school counselor, and they came up with Esparza as the one to be honored.

“He is extremely helpful and a good kid to be around,” Kingston said.

Esparza not only rode in a SWAT vehicle, he hung out at the park with Northern Colorado Regional SWAT team.

Jillian Esparza, Donovan’s mother, liked seeing her son in the SWAT vehicle turret, waving to the parade watchers. “He had so much fun,” she said.

Esparza said the best part of the day was riding in the parade. “Really fun,” is how he labeled the experience. He offered his thanks to Kingston for letting him do this.

The LCSO and the Northern Colorado Regional SWAT team anticipate having a SWAT kid to be part of future Berthoud Day celebrations.