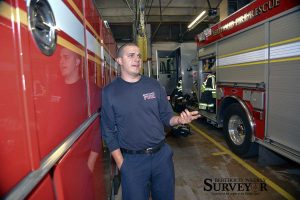 Berthoud firefighter Andy Burger discusses holidays at the firehouse in one of the equipment bays at the Berthoud Fire Protection District on Mountain Avenue.
John Gardner / The Surveyor

While the Berthoud community settles into the holiday routine and enjoys time with their families, for first responders it’s just another day on the job. Vigilant in keeping the holidays safe and the community secured are the men and women of the Berthoud Fire Protection District, The Berthoud Squad of the Larimer County Sheriff’s Office, and paramedics with Thompson Valley Emergency Medical Services, who willingly sacrifice their own holidays with family to serve others first.

“Even though we miss spending the holiday with family, we’ve got to keep our mind on the job,” said Berthoud Squad Sgt. Jim Anderson. “We have to be focused.”

The dark side of the holidays

“Everyone calls on their worst days,” according to Andy Burger, a firefighter with the Berthoud Fire Protection District. “Holidays aren’t any different.”

Unfortunately, tragedy is no stranger to emergency crews on holidays, with many severe incidents darkening their holidays in the past. First responders encounter “The dark side of the holiday season,” according to Steve Charles, Berthoud Fire Protection district chief.

First responders are tasked with doing their part to serve those involved in emergency situations. Whether the cause be inclement weather causing accidents on Interstate 25 or individuals consuming alcohol that may lead to disruptive behavior, the holidays can be a heightened time for emergency calls.

“So everyone else can celebrate and be safe, someone has to be out there to answer these calls,” said Anderson.

Anderson recalls several incidents that marred the holidays he has worked in years past, including a horrific murder.

“It crosses your mind, how can they do this on Christmas?” Anderson said. “But really it’s just another day.”

Anderson has dealt with several domestic calls due to family fights during the holidays and he feels these incidents certainly dampen the holiday spirit for officers.

Thompson Valley EMS Captain Al Simons has noticed that along with the holidays come houses full of concerned people when they arrive on scene during an emergency, which can strain an already stressful situation. And, due to bad weather, they receive a lot of calls involving accidents on the interstate.

A duty to fulfill

These service members realized early on in their careers that it’s a public service they provide and they are at the disposal of those who need them.

“My crew resign themselves to work holidays. In a sense it’s just like an ordinary day,” said Simons. “We’re all trained to do a specific job and perform it all to the same level, and maintain a good attitude.”

According to Charles, after 40 years of work in emergency services, he has been on call countless times during, not only the holidays, but also his children’s birthdays, and anniversaries. “When on duty, the community has to come first, we provide a service and can’t just close shop for a day,” said Charles.

He reflects on the fact that he has faced many serious fires on Thanksgiving Day in his career.

Over the last 28 years in law enforcement, Anderson, too, has resolved to have intentional focus no matter what day of the year it is. Although he would prefer to be with family on holidays he understands what is required of him in his role.

“I’ve worked several holidays,” said Anderson. “It’s no question; we have to have someone on the street.”

Based on a rotating schedule of days on call, firemen and paramedics are on shift one Thanksgiving or Christmas every three years.

“It’s the luck of the draw,” said Simons. “If you have to, you celebrate on Christmas Eve, you make those adjustments. My whole family is used to adjusting because of there being several other responders in family.”

During the holidays families of first responders are accustomed to working their celebration around their loved one who is on duty. On occasion, due to conflict in schedule, it works out that a family may have to carry on with the celebration without their first-responder relative. Many of the crews find if they work Thanksgiving they usually work Christmas as well.

Charles remembers the fire of ’92 that burned The Wayside Inn to the ground. It was his first year as chief in Berthoud.

“My family waited for me after Christmas to celebrate because of the fire,” said Charles, “Kids would rather have mom or dad there than do holidays without them.”

First responders anticipate sacrificing their holidays at some point in their career, however, they have found ways to still get the time they need with their families by looking forward to next year’s holiday off, or by taking vacation time, or by adjusting the celebrations to a different day.

“The family has to change their whole routine to another day. It’s not easy, and we try looking ahead at next year,” said Anderson. Anderson added that because his kids are grown he will often offer to work the holiday shift for deputies with families.

“Somebody has to do it,” Anderson said.

Participation in local holiday events are part of many first responder’s holidays. For them the community they lay their life on the line for is a community they have come to revere and one they’ve become a part of. Many of the first responders don’t live in Berthoud, nonetheless it’s become a part of their lives; the fire station, a patrol car, or the ambulance station is their home away from home.

“We want to engage with the community and invest time and effort into serving them.” said Charles.

Service members take delight in having their families join them in the Christmas in Berthoud festivities. Many of their children participate in the parade. The fire station lends a fire truck in which Santa rides, for the parade.

“All our kids here are in the parade; they grow up together,” said Danny Reese, another Berthoud firefighter.

Lights are hung from fire engines and at the fire station; a Christmas tree is decorated at the police station; and occasionally an ambulance is decorated. Sometimes it’s these simple things that give service men and women another reason to love their career and invite the support of their community. 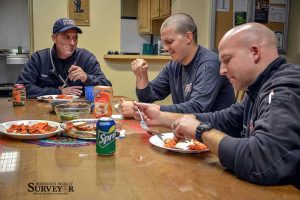 Thanksgiving at the firehouse

Even though the firefighters miss their families when on call during holidays, they aren’t necessarily away from family, because to them the crew is their family as well.

“We’re family here,” said Burger. “We spend a third of our life here, so we are comfortable with each other.”

The on-call Berthoud ambulance crew is traditionally a part of the fire station’s Thanksgiving meal. A sense of family is felt between crew members, as many of them have served side by side for several years in the community.

Despite the festivity and celebration, the community is priority, and if an emergency occurs, then out the door they go. Ironically, nearly every Thanksgiving meal has been interrupted with an emergency call.