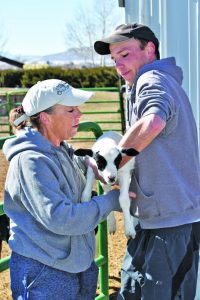 Robin and Bryce Barker, owners of Star View Farms in Berthoud, handle the babies on their farm daily to aid in socialization.

It’s springtime on the farm, and new life is appearing by the day. This time of year visitors to Star View Farm in west Berthoud might be greeted by a day-old calf curled up behind its mother’s legs or a squealing litter of newborn piglets feeling the sunshine on their backs for the very first time.

If you tour the 120-acre farm with co-owners Bryce Barker and his mother, Robin, you might find yourself hard-pressed to leave. The two don’t just do farm life, they revel in it.

“It’s all day, every day, and I wouldn’t want to do anything else,” said Barker, whose farming journey began when he was a student at Berthoud High School, showing pigs and rabbits in 4H.

“My first show rabbit was overweight, and too fat to show,” Barker recalled. “I remember just laughing when the judge told me, thinking ‘Well, thank you, I’m glad he’s well fed.’ That was my first experience with farm animals.”

From there Star View Farm quickly grew, as the Barkers tackled one new species at a time, learning everything they could along the way.

“We got nine chickens 10 years ago, and it was the first time we ever had fresh farm eggs,” said Barker. “I thought, ‘Oh wow, I didn’t know eggs had a flavor.’ That kind of started everything off, as I realized that maybe everything tastes better when you raise it yourself.”

The duo began researching pig genetics and soon began raising Berkshire pigs, hailed as the “angus of the pig world.” Then three years ago they traded 175 small bales of hay for their first cow, who they named Katie.

“She was supposed to go in the freezer, but once we saw her we both agreed immediately that we weren’t going to do that and she was going to be a mama for us eventually,” said Barker. “She gave us our first baby, named Ruby, which we still have.”

While the farm has expanded over the past several years to include American Aberdeen and British White cattle, Dorper sheep, and hundreds of chickens and bees, the Barkers’ love for their animals and comm 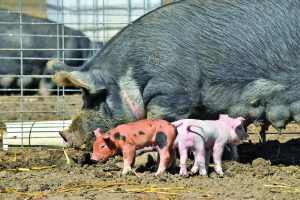 Two Duroc Berkshire cross piglets venture outside for the first time under the watchful eye of their mother. They’ll be sold to local 4H kids to take to fair this summer.

itment to humane treatment and a high-quality food product has never diminished.

From a heifer that loves to wear hats, to Ms. Daisy, the chicken who was recently moved into her own personal retirement suite to live out the remainder of her days, to fluffy white lamb tails the Barkers refuse to dock beca

use they like to see them wiggle, it’s clear no matter how big the farm has grown, each animal is still treated to the highest standard of care.

Today Star View Farm sells beef, pork, lamb, turkeys, eggs, honey and jam to the public. Their products can be found at the Hays Markets in Berthoud and Johnstown, Niwot Market, and Heritage Market in Eaton.

The latest development on the farm has been the introduction of Artificial Insemination (A.I.) in the Barkers’ breeding practices. The two attended a class in Ault to learn the art of A.I.ing their pigs and cows, and have since begun using the method in all of their pig breeding.

The advantages of A.I. include the ability to breed without keeping a male on hand, and to select from a large pool of genetics from a wide variety of males, both alive and deceased. In addition, it eliminates risks to females that can occur during traditional mating.

“When breeding, the qualities we look for are docile, easy calving and confirmation,” said Barker. “Then I look at the feet. A lot of people overlook the feet, but that’s where I start because that’s the foundation of the animal.”

While the Barkers are still relatively new to A.I., they hope to make it a big part of the farm in the future. The two plan to A.I. their heifers for the first time this spring, and Barker would like to gain expertise in order to help others interested in the breeding method.

“What I would like to do is A.I. anyone else’s animals so I can get more practice at it, and then help people that have no way of doing it,” he said. “We’re going to monitor the animals all day, every day, watch for every sign of heat, know exactly when to do it, and we’ll have all the stuff on hand so we can get the semen into the animal as quickly as possible.”

In the meantime, the Barkers are using their A.I.-bred Duroc Berkshire cross pigs to help local youth with their 4H projects.

“The way the 4H market has been going for pigs, a lot of kids have to go to an auction and spend over $1000 on a little pig,” said Barker. As soon as we heard about that we started raising pigs for 4H kids.”

The Barkers charge $200 per pig, with a discount for families who buy more than one, so youth have a good shot at making a profit at auction.

“Last year a local girl came out and bought a pig from us, showed it, and when she went to auction she got $5000 for her pig, on a $150 investment,” said Barker. “I think that’s great, that she’s going to apply that to college, or a car, or whatever.”

Of course, for the rest of us, fresh meat and food products from humanely raised animals, along with the chance for a private tour of the farm courtesy of the welcoming and knowledgeable owners are reason enough to plan a visit. Anyone interested in scheduling a tour or purchasing farm products, can contact Barker at 970-691-0623, [email protected], or on social media @StarViewFarmLtd.

“It’s a lot of work and a lot to learn, but it’s fun,” said Barker. “Every day I’m out here giving the moms their treats and grouping up the babies and playing with them. It’s good for the animals, but it’s great for me, too.”