Scouting for Food has biggest year ever

By Kayla Dome
The Surveyor 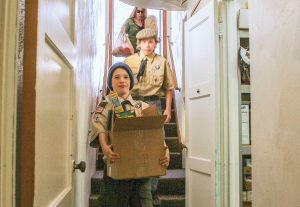 Jace Courtright and Richard Schiraldi delivered food to the House of Neighborly Services office in Berthoud.
Kayla Dome / The Surveyor

Berthoud’s Boy Scouts, Cub Scouts, and Girl Scouts gathered at the Methodist Church on 9th and Franklin to gather food for their community on March 21. After a word from the Senior Patrol Leader, Hunter Hursey, who kicked off their annual Scouting for Food collection day, the troops divided and scoured their town for donations from Berthoud residents.

With the help of other local volunteers, the local troops collected food from both rural and urban Berthoud neighborhoods. The support from the community was astronomical. After all the collections were in on Saturday, a total 5,365 pounds of food and supplies were donated.

“This is a record for our community based on the numbers I have for the past 15 years,” said event organizer, Jen Rotar. “The most food collected previously was 5,322 pounds in 2007.”

After pairing off, based on neighborhoods size, the troops, with their adult drivers, departed to gather food. Two Boy Scouts from Troop 6, Jace Courtright and Richard Schiraldi, strategically took on the neighborhood around Berthoud High School. Their driver, Megan Courtright, followed the Scouts from house to house with her car as they knocked on doors and collected the food left on the curb for quick pick up. Both boys worked together to gather all the generosity of this neighborhood.

Jace, a Second Class Scout and veteran to the process, has been a boy scout for at least four years. His experience helped Richard through his first year helping with the Scouting for Food event. 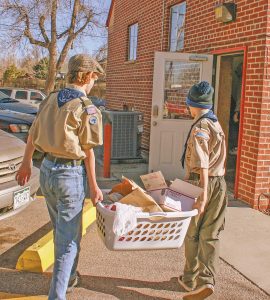 Jace Courtright and Richard Schiraldi delivered food to the House of Neighborly Services office in Berthoud.
Kayla Dome / The Surveyor

“I joined last year, somewhere in November,” Richard said of his experience with the Boy Scouts thus far. “So I like it.”

As they raced from street to street it was very clear that they both enjoyed this opportunity to collect food for the less fortunate and the organization they represent.

All of the food collected benefits the House of Humanly Services who provides food for those in need in the Berthoud community. Operating out of the First Presbyterian Church, this local nonprofit also served as the collection point for all the food donated. As the food was collected, it was brought back to the church and weighed by the volunteers who were ready to organize all the donated items. Tables and tables of food quickly filled the basement of the First Presbyterian Church. The overall great response from Berthoud allowed the troops to uphold the integrity of the annual Scouting for Food collection day. Clearly, their efforts paid off and those less fortunate will reap the benefits of the hard work of Berthoud’s local Scouts.