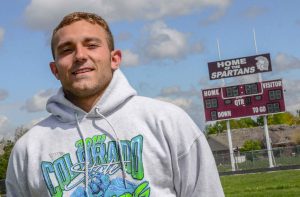 Berthoud High School senior Nate Ryken has committed to play football at Colorado State University (CSU) this fall after accepting a preferred walk-on offer from the Rams this past weekend.

“It’s really exciting. CSU is where I was really hoping to go,” Ryken said Monday.

The 6-foot-2-inch, 234-pound Ryken was recruited by the Rams to play offense where he said they’ve expressed interest in him as a fullback. He played running back and defensive end for the Spartans this past season.

Ryken is a four-year starter on varsity for the Spartans. Playing Division I football has been Ryken’s goal since he first started playing the sport as a child.

While this agreement didn’t come with a scholarship, it guarantees him a roster spot, according to Warren McCarty, who helped Ryken navigate the recruiting process.

“I think he’s going to have a good chance going in there and making a name for himself,” McCarty said.

McCarty said that it’s his opinion, with Ryken’s size and ability; he’ll be able to fill a spot in the Rams backfield and also have some opportunities with special teams.

Ryken said he takes the opportunity to play seriously and said that he’s prepared to prove himself on the field.

“I’ll have to earn a scholarship, which I plan to do,” Ryken said.

He found out on Friday, May 9, that he’d received the offer when he received a call from McCarty, host of My Passion is Football radio show on ESPN 1580am in Colorado Springs.

“[McCarty] called Friday evening and told me to start watching what I eat because I’ll have to start football training,” Ryken said.

Along with playing football, Ryken also wrestled at the 220-pound division where he made it to the state tournament his senior season. He also threw shot put and discus during track and field and was consistently a top contender each week.

He said he’s looking forward to playing with a CSU team on the upswing after hiring third-year Head Coach Jim McElwain from Alabama in 2011. In his second year at the helm, McElwain’s Rams defeated Washington State in the New Mexico Bowl in December with a 48-45 come-from-behind win.

While Ryken considered other colleges, CSU remained his top option.

“It’s going to be nice to be so close,” he said. “It’ll be nice to still have all the support of my family and friends.”