The portion of U.S. Highway 287 that runs from State Highway 66 in the south to Highway 402 in the north will be renamed the “SPC Gabriel David Conde Memorial Highway.” Gabriel “Gabe” Conde was a Berthoud High School graduate who was killed in action in Afghanistan while serving for the United States Army on April 30, 2018. 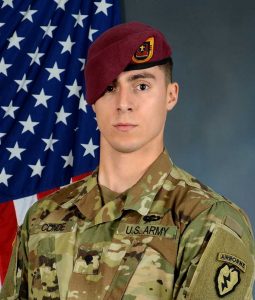 The name change was made official Monday by a unanimous voice vote in the Colorado General Assembly. The resolution, officially titled SJR21-018, was co-sponsored by State Senator Rob Woodward (R) and State Representative Mike Lynch (R) whose districts include Berthoud. The Colorado Department of Transportation (CDOT) will erect the requisite signage along the stretch of highway in the near future.
The effort was initially spearheaded by SPC Conde’s family including mother and father Donna and Bob Conde and uncle Monse Conde as well as 8 VFW Post 12189 Commander Ryan Armagost.

“I had the honor of sitting in on the presentation of our bill to rename Highway 287 by Senator Rob Woodward and Representative Mike Lynch. I was also able to share this day with Gabe’s parents, Bob and Donna Conde. The bill passed with all in favor, and now will await CDOT scheduling to make and place the signage on Highway 287 at Highway 402 and Highway 66,” Armagost said in a social media post sharing the news.
“The presentation was done in such an honorable and compassionate way to the Conde family that I even got emotional. What a tremendous tribute to such a well-deserving warrior. It was so exciting to see this come to fruition after almost two years of leg work to get it approved as a bill to the Senate floor. Amazing!”

Gabriel Conde graduated from Berthoud High School having excelled in academics and sports. He served the poor on mission trips to Mexico. His family still lives in the Berthoud area. Gabe had completed his freshman year at the Colorado School of Mines before enlisting and pursuing his dream of becoming a green beret.

Gabe was first assigned to Joint Base Elmendorf-Richardson in Anchorage, Alaska. Then in September 2017, he was deployed to Afghanistan in support of Operation Freedom Sentinel where he was selected to support the Special Operations Joint Task Force. In the eight months he and other members of his platoon provided uplift support to the green beret elements and Afghan national security forces, Gabe went on approximately 80 missions.

He was killed in action during an intense firefight in the Kapisa province of Afghanistan while providing cover fire from the roof of a building to protect U.S. Army Berets and Afghan Commandos who were maneuvering through the urban terrain to reach the building. Gabe stood strong, without regard for his own safety, engaging enemy personnel while calling out enemy positions to our ground forces. He continued engaging the enemy and defending his fellow soldiers even as enemy rounds and shrapnel struck the building and his body armor. It was during this intense battle that Gabe was struck by a single bullet that missed his armor and killed him instantly. The shemagh (Afghan head wrap) that Gabe wore across his chest that morning was found to have six bullet holes. He was 22 years old. He loved God, his family, his friends, Colorado and the United States of America.