Berthoud High School presents ‘The Voice of the Prairie’ 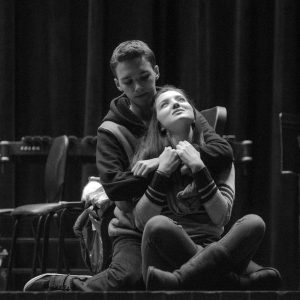 Brandon Sutorius, playing the part of Davey, and Emma Maggi-Byers, playing
the part of Frankie, run through a scene of John Olive’s “The Voice of the Prairie”
at Berthoud High School on Nov. 11.
John Gardner / The Surveyor

For their directorial debut as the Berthoud High School (BHS) drama instructors, Berthoud’s Chris and Cheryl Kouns wanted to do something a little bit eclectic and unique. And they’ve succeeded in this fall’s presentation of John Olive’s “The Voice of the Prairie.”

Part of the reason for choosing this particular play, Chris said, was to give the young thespians a chance to perform a more “modern” piece of theatre over the typical American classics that the drama club is accustomed to.

“I decided to pick something more modern to give the community a chance to see what the kids can do with something more modern, but that still had heart and with a theatrical convention to it,” Chris said. “It won’t look like another play you’ve seen before at the high school.”

“The Voice of the Prairie” tells the tale of a pair of storytellers; Poppy and his young companion, Davey Quinn.

The “Voice of the Prairie” centers on the time-honored tradition of storytelling, bouncing between Quinn’s life in the 1890s and his life in the 1920s. The story follows Quinn, played by BHS’s Johnny Vaughan, as he’s discovered by a radio entrepreneur while telling stories of Poppy and Frankie Reed, played by Emma Maggi-Byers, a young blind girl Quinn rescued from a cruel father in their younger days. Quinn becomes famous, at the time during the emergence of radio, for telling the tales of adventure with Poppy and Frankie.

The play itself, while set in the Midwest, represents a lifestyle that is similar to Berthoud, Chris said. That comparison, too, connected Chris to the play.

“The small-town nostalgia factor, it just felt right for a first expression for me and it felt right for this place,” Chris said. “Even though [the story isn’t set] in Colorado, if you look at it, the kind of remote aspect, rural aspect, really resonated with me and what is true about this place.”

It’s a multi-layer theatrical experience that Chris said is a fun and challenging way to explore storytelling for the drama club.

“That’s what I love about the gimmick of this show,” Chris said, “it’s about small-town life in that time.”

“It has real Berthoud spirit to it,” Chris said of the script. “And it’s a cute way to introduce the kids to this way of storytelling.”

The BHS Drama Club’s presentation of “The Voice of the Prairie” will have two shows only on Nov. 21 and 22. Both shows are at 7 p.m. in the BHS auditorium. Tickets are available at the door for $7 for adults; $5 for students.