The front page of the December 30, 1948, edition of the Berthoud Bulletin recapped the year’s top stories. The paragraph heading the month-by-month list explained, “Out town has its own special history for 1948, and the records show that those twelve months were crowded with a great variety of community events.” 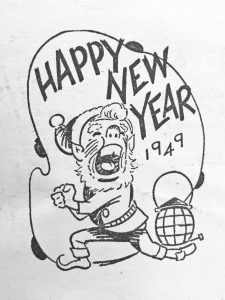 Top stories in February 1948 were, “Preparation for installation of new Hammond organ in the E.U.B. Church [Evangelical United Brethren church at 4th Street and Mountain Avenue] begun…the Berthoud Boy Scouts receive awards at the celebration of their 38th anniversary…Recreational Association formed with Rev. Rundell as president and Helen Fickel as secretary.”

In May 1948 “The fire department was called to the farm of John Schwab where a fire broke out and damage was estimated at $5,500…Five pictures were shown in the Denver Post last Sunday about the Old Berthoud School…I am an American Day was observed in Berthoud as a dedication to Berthoud’s permanent honor roll, containing the names of World War II veterans.”

June’s top news was, “The 1928 graduating class of Berthoud High School [23 students] held a reunion in Denver—all but eight of the members were present.”

In July 1948 the local tabloid reported, “The Berthoud Bulletin changed hands July 1 when Darrell Bartee took over…Chamber of Commerce decides to stage first annual Flapjack Day…Berthoud had a display of fireworks headed by George Rueter on July 4…and T/5 Harry D. Hahn who died in Europe in World War II, was buried July 22 in Berthoud.”

News in August 1948 was, “The Little Thompson 4-H Club staged a big parade of livestock in Berthoud…The Berthoud Gun club hit a new peak when 16 out of 20 members had a score of more than 20…The Pet and Doll parade in Berthoud by Girl Scouts and Brownies.”

October 1948 news included, ”The Berthoud Boy Scouts went on an overnight hike up to Cabin Creek near Allenspark…John Bunyan listed as one of a hundred new members of the Association of Alumni of the University of Colorado…Girl Scout groups celebrated Girl Scout Week with displays in business windows.”

In November 1948, “Over $300 of radios stolen from Platte Valley Farm Supply…A Bean Feed sponsored by the Berthoud Boy Scouts was a great success…Nearly 300 people were x-rayed for tuberculosis…Berthoud High’s football squad was honored at turkey dinner.”

The local newspaper did not list any top stories for December 1948 but important news items that month were the neatly trimmed Christmas tree put up at the intersection of 3rd Street and Mountain Avenue by the Town of Berthoud, a “cooked food and rummage” sale conducted by the P.E.O. sisterhood, and the acquisition of a Ferguson tractor franchise by the Platte Valley Farm Supply Company located at 425 3rd Street.

Featured less prominently on the front page of the Berthoud Bulletin was a list of the ten top national news stories selected by newspaper editors from across the United States. The editors’ list included, “(1) President Truman’s election, (2) the Berlin blockade, (3) the assassination of Bernadotte, (4) the organization and sectional success of the Dixiecrat Party, (5) the war in China, (6) the high cost of living, (7) the Kasenkina episode, (8) the death of Ghandi, (9) United Nations proceedings and developments, and (10) activities of the 80th Congress.”