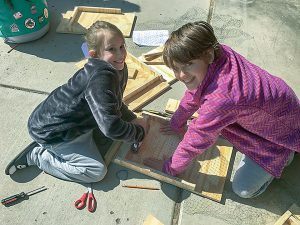 Lucy Hein and Sara Rotar with Berthoud Girl Scout Troop 70700 build bat houses as a group project that will ultimately be placed at several Berthoud parks.
Courtesy of Jen Rotar / The Surveyor

The next time you take a stroll through one of Berthoud’s scenic parks you may notice something just a little bit different about the surroundings. It’s because local Girl Scouts from Troop 70700 – all fifth graders – spent the previous several months planning – then constructing – bat houses in pursuit of the Bronze Award: the highest honor the girls may earn at their age level.

As troop co-leader, Jen Rotar, explained: “We were visiting the Berthoud community garden (at Pioneer Park), and while we were there we were being eaten alive by mosquitoes. I don’t recall which girl brought it up first, but one of them did, and another said, let’s build bat houses for the park.”

According to Berthoud Parks and Recreation Director Jeremy Olinger, bats in general are beneficial to any community in that they are critical pollinators for a wide variety of plants in a variety of ecosystems. They are also seed carriers for fruit trees, he said.

“The benefit for the Town of Berthoud – specifically community members may notice – is that bats eat a variety of insects, moths, flies and mosquitoes. They have been known to eat up to 1,200 mosquitoes an hour which could help minimize ? and be a non-chemical evasive treatment to control West Nile in town,” Olinger said.

Rotar added, “When the girls have been asked, ‘Why do you care about bats?’ the girls have been able to educate people that bats eat so many mosquitoes, they’re a really great natural pesticide. Bats don’t really hurt people in any way. They’re pollinators. They are really critical to our environment.” The girls visited town parks and researched bats and how their homes should be constructed. Afterward they made a presentation to the parks department and were given authority to move forward with the project, then received a grant through Jane Goodall’s Roots & Shoots organization. At last month’s town board meeting they delivered their final presentation to the town board. In fact, the young ladies saw Goodall speak in Boulder last September – something that inspired the troop measurably.

“That was really, really amazing,” troop member Sara Rotar commented on witnessing Goodall speak. “It was probably one of the best times I had as a Girl Scout.”

While it has yet to be precisely determined where the bat houses will be placed, both Olinger and Rotar cited Pioneer Park, Town Park, Fickel Park and Hillsdale Park as priorities. Olinger noted the homes will be “close to water sources, away from light and under shelter eaves for protection.”

“We met with the parks and rec department in January, expecting two or three to end up in Pioneer Park,” Rotar said. “The parks department was extremely excited about the thought and they suggested several other spots we could put the (bat houses) around the town.”

Sara considers the girls in her troop to be “pretty awesome” and her “best friends.” In addition to the bat home community service project the troop members also volunteered in the Berthoud community garden last July in order to earn their Gardening Badge. The girls learned about planting seeds and gardening as well as harvesting.