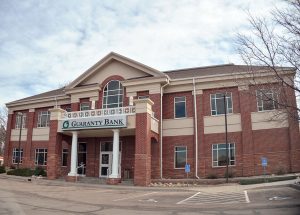 Berthoud Trustees discussed the option to purchase the Guaranty Bank building for use as a new town hall facility at its Tuesday meeting, however; Town Administrator Mike Hart told them that no decision would be made until the March 22 meeting at the earliest.
Surveyor photo

The town tapped the brakes a bit to slow down the process in purchasing the Guaranty Bank building for use as a new town hall at the Tuesday board of trustees meeting.

Town staff recommended a motion to approve the agreement to purchase at Tuesday’s meeting but that was an error on the town’s part, according to Town Administrator Mike Hart.

“What we need tonight is direction as to whether or not you want us to continue to move forward,” Hart told the trustees and those in attendance. “Tonight is only discussion.”

That news provided some relief to residents who attended who were surprised at the short notice of the possible building purchase.

“I’m really glad to hear that,” said Berthoud resident and former Berthoud mayor, Milan Karspeck, during public comment. “When I read in the paper and in the packet, it sounded like you were going to make a decision tonight and I was really concerned about that because I think it’s a significant investment.”

Now, trustees will take the next two weeks to consider the $2.4 million purchase agreement and are expected to vote on it at the March 22 meeting. The agreement includes the building and all its furnishings and comes with lease agreements for current tenants, Edward Jones Investments and Cultura Technologies, and also a new lease agreement with Guaranty Bank that is looking to lease back roughly 2,000 square foot of the nearly 17,000-square-foot building.

Hart first addressed funding for the property and dispelled rumors it would take away any opportunity for the town to build a recreation center.

“The answer is no,” Hart said. “This is a totally different money source.”

A unique aspect of the agreement is that the town is attempting to purchase the building with cash and isn’t seeking a bond. The funding comes from impact and expansion fees the town received during previous years through development, according to Hart. The $2.4 million is divided from three town funding sources: one-third from the town’s general fund, one-third from water utilities fund, and one-third from the wastewater utilities fund. That allows the town to purchase the building outright and wouldn’t have a loan to repay.

“Those funds are available and that doesn’t cause problems with our 10-year capital plans at all,” Hart said.

All of these funds will replenish every time the town issues a building permit. It receives between $30,000 and $40,000 in fees, including raw water fees for each permit, Hart said.

“These fees that we’re proposing, the general government fees, come out of a fund that’s been accumulating for quite some time just for this purpose,” Hart said. “This is a fee for expanding a building, and we’re in a building we’ve been using for 86 years as town hall, so it’s kind of overdue for an expansion.”

The agreement allows Guaranty Bank three months to determine its space needs. The plan is to lease back space to the bank; around 2,000 square feet of the first floor and the bank’s teller drive-up window. That agreement would yield approximately $48,000 annually according to town projections; along with the other two current tenants, the town presumes would continue their leases, generates over $100,000 in rent annually as well.

According to Nathan Klein with LC Real Estate, who brokered the deal, in the first six months the town is expected to see a 7.5 percent return on initial investment. Even if the town lost one of the current tenants, it would still be in a positive cash flow situation, Klein said.

Former trustee and current candidate Jeff Hindman voiced his concern with the deal but was pleased they decided to hold off on a vote until March 22.

“The packet clearly stated that the staff recommendation was to make a decision tonight and that would have been really short-sighted in my opinion,” he said. “So it’s really good that you’re going to wait and get more input.”

Hindman said he’d like to see the town consider other options, including a previous idea to build a town hall at the site of the Berthoud Skate Park at Mountain Avenue and Second Street.

Trustee Paul Alaback commented he wanted to weigh the options of building a new facility versus purchasing this existing building based on the town’s actual needs.

Alaback also mentioned one of the greatest needs of a new town hall should be to provide a larger meeting room to accommodate larger crowds when the important issues arise.

“One thing that I’ve felt has been really frustrating about this building has been whenever we have an issue people are interested in there’s not enough room for people to come and talk to us,” Alaback said. “One of the big advantages of a new building is that we could design a council chamber that is appropriate for our needs.”

Trustee Chris Buckridge said he would like to see more information regarding cost and feasibility of constructing a new town hall at the Berthoud Skate Park site, but he also voiced his support for the deal that was presented.

“This is an opportunity that has been presented to us at the right time to fill a need that we weren’t thinking of right away, but at the same time you have to strike while the iron is hot. And an opportunity like this to get a facility like this for this price may not come again in the foreseeable future; do we want to pass that up?” Buckridge said.

Hart said the town has considered other options, including the skate park property, the former Grace Place facility when it was available, and even putting temporary modular units in the parking lot of the current town hall. But none were as appealing as this option.

“It’s not as if we haven’t thought of some of these other things,” Hart said. “This opportunity came to you right now, so it’s here to consider. And we can do that, but if you want to start now really drilling in to every potential site and every potential cost…you’re not going to move into a facility like that for $150 per square foot. But there are a lot of discussions to be had; there are a lot of options. This seems like one that merited consideration by the board and we brought it to you.”

The purchase agreement currently is scheduled for a March 31 closing date. But Hart said the bank may be willing to push back the closing date.

Mayor David Gregg said, when considering the entire package, everything the town would get in the deal in terms of quality of the building, size, amenities like the building being up to code and ADA compliant, parking, and the location, and that the building comes furnished and with tenants that will provide some revenue for the town, it’s a good option to consider.

“I see it as a 50-cents-on-the-dollar opportunity,” Gregg said. “It’s very worthwhile to consider this and I do appreciate the opportunity to do this.”

Gregg asked about the option of taking on debt to purchase the building instead of paying cash for it out of the town’s utilities funds and impact and expansion fees. But, Hart said, taking on debt would require a ballot issue approved by voters.

“In the interest of time, that’s why we went back to the funding, thinking can we make this happen with cash? Because cash helped us get a better price with the bank as well,” Hart said.

The building appraised for $2.6 million.

Additional information on the purchase agreement is available on the town’s website for public review.

“I want us to keep in mind the delicate balance between making sure we are thoughtful in our analysis, and provide the public with all the information that we’re privy to, and also being realistic and realizing that if we are able to act at the speed of business instead of the speed of government on this matter, this potential 50-cents-on-the-dollar opportunity that has been brought before us may not be here if we think about it too long,” Gregg said.