Good news about your water supply 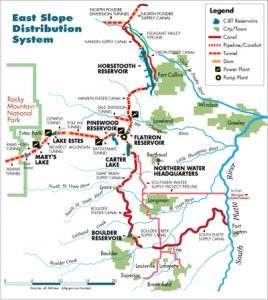 Strong regional water storage coupled with below-average precipitation prompted the Northern Water Board of Directors to increase its 2018 quota allocation for the Colorado-Big Thompson Project to 80 percent.

The Board unanimously approved the allocation at its meeting Thursday at Northern Water’s Berthoud headquarters.

Sarah Smith, a water resources engineer at Northern Water, said total storage in the region was above average for the fifth-straight year. While Colorado precipitation has been below average this winter, recent storms boosted the snowpack in the northern portion of the state.

“The Poudre basin did benefit quite a bit from those storms,” she said.

Water Resources Manager Andy Pineda recommended the 80 percent quota to the Board based on the existing snowpack totals, runoff projections, regional water storage and input from water users.

To learn more about Northern Water and the C-BT quota, visit www.northernwater.org.