Kirk Speer is a lucky man. His online business fills a niche in a unique market. In this case it’s fountain pens.

You know, those things some of us struggled with in school, or remember our parents or grandparents using them to write letters. Fountain pens are still a thing to a subset of our population.

In 2016, Speer was searching for treasures in an antique store. While there, he found an old pen. Finding the pen surprised Speers. He did not know you could still find them or get one to work.

Speer purchased that pen for five dollars, and discovered it was worth “a considerable amount more.” Later he got his grandfather’s pen that was the same model as his first find.

Speer researched old pens online and got the antique store one to work. This sparked his interest to search out more old pens. He did this in person and online. Speer’s company is called Pen Realm.

Anyone with an old pen can contact Speer to see if he can get it to work. He also values pens and sells them or takes pens on consignment. 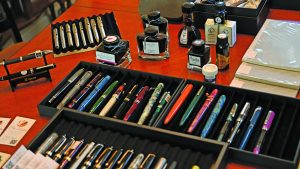 Many of the pens Speer found were damaged or had bent nibs (tips). To send one of these pens to a professional repairer was expensive and took a lot of time. This led Speer to learn to do his own repairs.

Since a lot of people are still into fountain pens, he set up a shop with a grinding machine and got to work. Speer shows his work on social media.

He can custom grind tips for specific needs or functions. He can grind the nips smaller for left-handed people, he said, so the ink does not smear. He custom makes nibs for others, like architects, that makes a narrow downstroke and a broader cross-stroke.

Pens for beginners are also available for sale from Pen Realm. The nib on many of these is round. Speer says this provides a nice smooth movement of the pen on the paper. A pen of this type sells for around $33, so it is affordable for many who want to try this style of writing.

Speer says fountain pen enthusiasts cover all ages. Pens are popular with many that are college age. Parts of Europe still use fountain pens at school. The same holds true for Asia. Another pen-using group is lawyers and doctors. Speer added that architects and engineers favor using ink pens.

“A fountain pen is supposed to write under its own weight,” Speer said. Some who suffer from hand cramping or carpal tunnel seem to find comfort when using a traditional fountain pen.

Fountain pen conventions and shows are popular. Speer attends around ten of these a year. Typically, there will be 20 to 80 dealers. This includes people like Speer who have an online business, people with large pen collections, others who inherited parents’ pen collections, and those who go to antique stores and auctions for finds. They try to sell what they have found at the shows. A few brick-and-mortar stores send representatives too.

Speer also goes to a large fountain pen store in Houston about ten times a year. He works on and repairs pens for the store’s customers.

Speer sells “everything to have a well-writing pen.” His website has many options for different inks and writing paper. Pen Realm sells its products in the U.S. and internationally from Speer’s home in Berthoud. He says many items are purchased as gifts.

“It’s a growing industry,” Speer stated about fountain pens. He probably will not open a storefront. Speer’s wife, Crystal, is assisting the business by increasing Pen Realm’s visibility on social media. Speer’s son helps by taking photos of pens and other products for the website.