Have you noticed the angle of the sun dropping to the south? When the nights get cooler and the sun begins to move south the bees become much more aggressive. My hummingbirds have to maneuver through the bees to get a drink. The bees are just frantic to get the sweet water. I do have a birdbath about 10 feet from the bottle so it is not simply water they want. Energy is what every one of them is seeking. We all live by the seasons. One of my favorite old books is called Countryman’s Year by Haydn Pearson. It was published in 1949 and is full of short essays on the seasons in the life growing up in the country, and the many jobs of those who did. At one point my wife gave her father a copy and he underlined parts that were especially happy memories to him. This book will be a family heirloom. 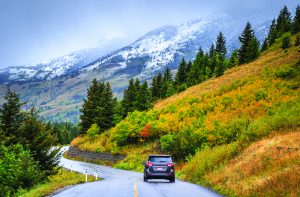 In my neighborhood, I recently drove on a road over the Big Thompson River. I looked down in time to see a red fox with two kits at the water’s edge. This year’s Osprey young are still resting on the platform nest near my home. They can fly and can fish for themselves now. In winter they head south to Texas or further south into South America to open fishing waters for winter. But until they begin that migration these teens will hang out at home. When the juveniles leave, they fly alone not following their parents. Their flight south is done purely by instinct. I read they will live a whole other year in the wintering area and I imagine that is so they mature and learn expert fishing. These will not fly north again until they are breeding age which is 2 or 3.

My wife and I just returned from a short vacation up to Wyoming and Montana. We stayed in Red Lodge, Montana for a few nights. From Red Lodge we drove across the 68-mile Beartooth Highway, into the north entrance of Yellowstone. This road is a Trail Ridge road on steroids! We had driven it years ago so we knew it is not for the faint of heart lowlander. We were even warned of that in Cody, Wyoming at their visitor center. However, we grew up on the pig trails and winding shoulderless mountain roads of Western North Carolina. Tight curves and no guardrails are not a problem to us but we could see how they might be a problem for some. The website for the Beartooth highway called it the wild side of Yellowstone and says this road is one of the most diverse ecosystems accessible by car in the United States. Tent camping on the wild side of Yellowstone is prohibited due to bears. I fly fished in the Lamar Valley for Yellowstone Cutthroat trout and encountered a roaming black bear with two cubs that crossed upstream within fifty yards of me. She was oblivious to me until she caught my scent on my side of the stream. I began talking loudly to warn her of my presence. You don’t want to startle a bear with cubs. I did see large grizzly tracks along the banks as well. It does make you think but they didn’t stop me from fishing. We saw bison, elk, and deer in the Lamar valley. We passed groups of visitors and rangers using spotting scopes to see the elusive wolves. It is going to be more common to see them in Colorado in the future.

This past week we had the first dusting of snow on the peaks of our highest mountains to the west. I remember in the years we lived in the foothills west of Denver at over 8000 feet in elevation, there would come a first August day with drizzling cold rain. That was our signal to get ready, snow is not far off. At this age, I enjoy our life at lower elevations. We get the extended four seasons. It is not as abrupt as when we lived in higher elevations. But there are signals no matter where you live that the season change is coming. Let’s not rush past the harvest time. Are those roasting green chilies I smell in the wind? Ah, my favorite!