It’s all about connecting

Many small businesses start out of necessity. And many of those start in a garage. Berthoud-based Hilltop Broadband falls in both those categories.

In October 2013 Hilltop owner Eric Ryplewski wanted better internet at his home a couple of miles west of Berthoud. Previously, Ryplewski had a job where he dealt with wireless internet products. The former U.S. Navy electrician used his skills and materials at hand to solve his internet connection issue. Word of mouth about what he was doing brought him other connectivity business. “It became a full-time thing,” he said. 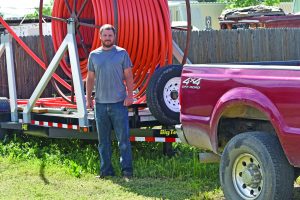 Last October he moved from his garage to the business/industrial area on Berthoud’s Second Street. He states he actually has two companies. One is Hilltop Broadband and the other is Colorado Community Fiber. “We named it that because we wanted to serve the community,” Ryplewski explained.

Hilltop has a variety of customers, ranging from individuals to large businesses. “The bulk of our customer base is residential and small-business market,” said Ryplewski explaining the company’s current demographics.

He added the company also does the management of networking for businesses. “Basically, anything networking inside the building,” is how he described it. Hilltop gets wireless or fiber to the business and then manages their network “from top to bottom,” he added.

The relatively small company with five employees, including Ryplewski, serves a large geographic area. This includes Loveland (limited coverage), Berthoud and Campion, Longmont, Erie, and limited coverage in Mead. They are also in parts of Custer County, Fremont County, Chaffee County and the City of Denver, including downtown Denver. See the Hilltop website, www.hilltop-broadband.com, for more details.

The Longmont-born-and-raised businessman is proud of the growth of this company. Ryplewski calls it a fast rate of growth. He says the business has grown 30 to 40 percent annually.

Continued growth is how Ryplewski sees his business in the future. He thinks the use of fiber optics will grow too. “It’s all about speed,” Ryplewski said when discussing data transfer and internet connection. Fiber optics is the best way to get this speed and the way of the future, he feels.

In the not-too-far-off future, Hilltop will be offering the capability to watch videos through their systems too. This will be a new service for them.

Another service provided by the company is telephone service for home and business. They use the Voice over Internet Protocol (VoIP) technology. Hilltop uses VoIP in their office. “We know it and trust it,” Ryplewski says.

There are many ways for people to get their internet and phone services, he acknowledged. “What makes us stand apart is our customer service,” Ryplewski says. “We answer the phones and when you call you get a real person,” he stated proudly. Also, he says after hours calls are returned in a couple of hours, depending on the situation.

Hilltop Broadband prides themselves on their honesty. The company does not do what Ryplewski calls “price games.” All the monthly fees for service, such as internet use, are on the Hilltop website. Ryplewski says there are no hidden fees or taxes.

The small and upcoming broadband company works regionally, but helps out locally also. Hilltop supplied internet service to the recent quilt show at Fickel Park and will do the same at the upcoming Hops and Harley event. They also provided service to Berthoud Day celebrations this year.

People can call Hilltop, talk about their situation, and get a quote for an estimate of services. Contact Hilltop Broadband at 970-344-9541.