Bobservation – Peeps candy, love it or not

If it’s Easter time, it must be time for Peeps candy chicks and bunnies. People either love or hate them. You can put me in the second group. My opinion aside, Peeps are the number one non-chocolate candy sold at Easter time.

This ubiquitous, sugary treat was started in 1953 by a candy company called Just Born. Turns out the company’s founder, Sam Born, liked the play on words on his name. Just Born also hinted that the candy was freshly-made. 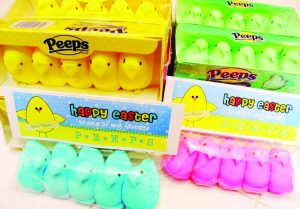 It is not true that in 1953, the company produced literally tons of the sweetness, and has been shipping that first batch out ever since. They do make new batches and in greater quantities every year.

Some people say you should never ask how sausage is made. The same may be true for Peeps, but I am going to tell you the ingredients. Peeps are a mix of sugar, corn syrup, gelatin, dyes and a pinch of salt. Side note: corn syrup is simply a sugar that has been extracted from corn and processed into a liquid form. So, Peeps are made with sugar and more sugar. A video on the Just Born website says the confection’s “secret ingredient is love.”

The sweet concoction is made into marshmallows. Traditionally, the marshmallows are shaped like bunnies and chicks. Peeps have expanded over the years to encourage those with a sweet tooth to purchase the product year-round. A recent advertising campaign states, “Peeps – Always in Season.” Now the candy is used for Halloween (pumpkin and ghost shapes), Christmas (tree and snowman shape) and hearts for Valentine’s Day.

In March 2021, Just Born and Pepsico (the maker of Pepsi products) announced a “limited edition” of Peeps marshmallow cola soft drinks. The soft drink came in mini, Easter-themed cans of yellow, blue and pink. Disappointing to some, the liquid was Pepsi’s normal color. To the surprise of no one, the “Peepsi” taste was that of liquid sugar.

As Easter 2022 is very near, it seems the marketing departments at Pepsico and Just Born will not pursue this project again. We can only hope.

Online research shows that there is a new Peeps collaboration for this Easter, and I am not making this up. A new product called Froot Loops (yes, the cereal) pops. Yes, pop as in lollipop, I guess.

Just Born has introduced some new flavors of Peeps from time to time. Peeps can be found in chocolate pudding-flavored marshmallow bunnies. The Peeps chicks have been seen in flavors like cotton candy, fruit punch, fierce cinnamon, party cake, sour watermelon and chicks dipped in milk chocolate.

For those that like Peeps, it seems there is no end to the supply. The candy company produces five-and-a-half million Peeps per day. This amounts to about two billion of the critters a year.

I guess I will stick to chocolate bunnies and jellybeans, thanks so much. Happy Easter.