Everybody loves a parade. Beth Beymer of StarFire Farm, LLC located west of Berthoud is no exception. For the second time, Beymer and her Norwegian Fjord horses made an appearance in the New Year’s Day 2022 Tournament of Roses parade. This was the 133rd version of this iconic New Year’s Day parade in Pasadena, California. 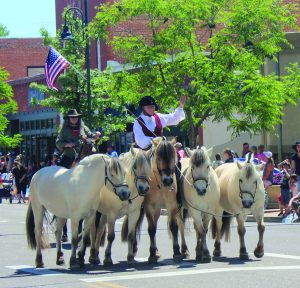 Courtesy photo – Beth Beymer in the 2021 Berthoud Day Parade. She used the same configuration at the 2022 Rose Parade.

Applications to be in the parade have to be in six months in advance. Once notified of acceptance, the hard work and planning start. The local contingency met up with other fjord horse enthusiasts from Washington, Idaho and Canada.

In the 2014 version of the Rose Parade, Beymer had four horses, two abreast pulling a carriage. This time she had five horses abreast with her riding the middle one. This is how she and her horses appeared in this year’s Berthoud Day parade.

Beymer wore a replica bunad, a traditional Norwegian celebration dress. Others from the fjord horse group went along the route as walkers, tending to the horses and monitoring the rows of spectators.

Beymer and her partner, Sandy North took three days to travel from Berthoud to Pasadena. They had a trailer for the horses and North had a camper van. Both Beymer, North and two of the horses are veterans of this trek to Pasadena.

Along the way, the group stayed with friends and at a horse hotel near Flagstaff, Arizona. Beymer says the hotel has pens for the horses to stay in.

On December 29, Beymer says the horses participated in the Equestfest event in Burbank, California. Each year, the Rose Parade’s equestrian units showcase their breeds and demonstrate their talent with performances at the Los Angeles Equestrian Center.

Two days later, the parade happened. Beymer and North wanted the horses to look their best, so attention was paid to the final grooming of the animals. Participants line up at midnight (on New Year’s Eve) and wait for the 8 a.m. parade to start. Beymer said they didn’t plan on not getting any sleep.

At 5:15 a.m., Beyer and two of the horses went to the Wrigley Mansion in Pasadena for a pre-parade interview. The 1906 historic landmark is the headquarters fo 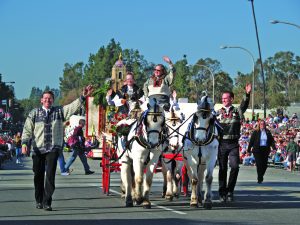 Beymer states that being in the five-and-a-half-mile parade that originated in 1890 is worth every bit of the effort. She gets emotional when she recalls turning down Pasadena’s Colorado Boulevard for the parade route. “It’s the most amazing feeling in the world,” she says.

Beymer grew up in the Los Angeles area and became professionally involved with horses at the age of 13. She recalls sleeping on the sidewalk as a kid, so she could watch the parade she is a part of now. Beymer enjoys sharing her horses around the world. “It’s a labor of love,” she remarked.

The latourist.com website states that “Every year for the last several, approximately one million people from around the world attend the Tournament of Roses Parade.” Countless others view it on television.

The parade can be watched on-demand through many cable providers and can also be viewed by visiting youtube.com/watch?v=vmJyjcEqunU where the Berthoud team can be seen just shortly after the 48-minute mark.