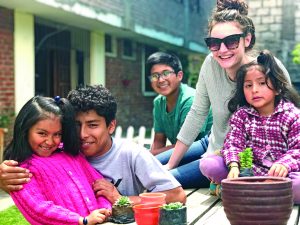 Courtesy photo – Laura Moffitt of Berthoud poses the last week of December 2017 with some of the children who are staying in the Nueva Esperanza Children’s Home, or New Hope, in Arequipa, Peru, where she is volunteering during her winter break.

Berthoud resident Laura Moffitt is using her winter break to volunteer at a children’s home in Peru for three reasons.

Moffitt wanted to travel, to figure out her career goals and, when she learned about the home, to help the kids. But then she got discouraged with only a few weeks to give from mid-December to the end of January.

“When I got here, I saw the magnitude of the issue at hand. … I felt like I was doing so little,” said Moffitt, 24, a senior at Metro State University in Denver, adding that she soon realized, “Even if it’s a little bit, a little bit helps. It’s so important to look out for those in need in your community and the people outside your community and try to give back to them as much as possible.”

Moffitt learned about the Nueva Esperanza Children’s Home, or New Hope, in Arequipa, Peru, from a coworker at the Pumphouse Brewery in Longmont. She used to work there as a hostess and then a server before becoming a server at The Roost, also in Longmont. Matt Statley, former manager of the brewery, is a missionary and the onsite coordinator at the home and helps run it with Ryan Rivetto, also a missionary.

“She didn’t go with a church or other missionary team. She’s done this just as a personal effort she wanted to make to serve someone else in need,” said Moffitt’s mother, Lisa, of Berthoud. “I’m just in awe of her courage and confidence. I’m also proud of the maturity and determination she displayed in why she was going. … She recognized the need to go and focus on someone and something other than herself and her own ‘stuff.’”

The children’s home, founded in 1995 and a 12-hour drive south of Lima, is at capacity with 45 children, including orphans and children who are abandoned, neglected, malnourished or removed from abusive situations. The home provides the children with care and physical provision in a Christian setting.

“It’s similar to the U.S. foster system, housing children who are in unfit situations at home,” said Moffitt, a volunteer in the home, alongside Tanise Neu of Longmont, who has been there for about a year.

The home, funded through individual, church and corporate donations, is divided into dorms for the boys and the girls, who live in family groups to help foster relationships with their peers and caregivers. House moms live in the home with the children, doing the cooking and assigning chores, providing the children with a domestic, home-like setting.

The children have the opportunity to participate in school, church and cultural activities and extracurricular programs. They receive transportation to school and wherever they need to go and help with their homework.

“The home tries to provide them with as normal a childhood as it can, lacking that from their parents,” Moffitt said.

The youngest child in the home is 18 months and the oldest is 22 years—the home does not age out children, unlike other orphanages that end services at 16 or 18 years of age, Moffitt said. To continue to stay, the children need to be working or going to school and contributing to the home, she said.

Once the children are ready to leave, the staff—there are 20 currently—helps them find a place to live and transition into adult life, Moffitt said.

Moffitt’s role is to support the mission of the home, providing structure and guidance for the children and spending time with them individually and in groups. She takes the children to the beach, the tienda or corner store, the local nursery and the city center and even to the Starbucks there.

“Starbucks is the rage with the kids. They know it’s American,” Moffitt said.

Taking the children out individually or in groups helps them develop important bonds, Moffitt said.

“I really enjoy just spending time with the kids,” Moffitt said. “They are so very jovial. They play a lot with each other and get along well.”

The foster system in Peru and other countries takes longer to remove children from poor home situations than the one in the United States, Moffitt said. She has seen children come from what she describes as “horrendous,” “horrid” situations.

“It’s powerful to be involved with that, encouraging children to grow up and become successful members of society despite their past,” Moffitt said. “It’s a very humbling and maturing experience to give to others, to give them something they don’t have. … It’s really important to keep the perspective of the thousands of cultures functioning around the U.S. It’s an important part of staying humble.”

Moffitt loves children and working with and serving them, Lisa said.

“I can just picture her every day, arriving at every event or activity or chore, one child in her arms, another holding onto her hand,” Lisa said. “Whatever the children are doing, working or playing, she will be right there among them.”

Moffitt, who was homeschooled and is a 2012 high school graduate, is studying political science and is interested in combining her love of photography with her studies for her future career, though it is yet undecided. She plans to graduate in May 2018.

“I don’t have anything set in stone. It’s an up-in-the-air topic,” Moffitt said.