Berthoud Area Chamber of Commerce: looking back and looking ahead

Saturday, July 9, marked the third anniversary of Deanne Mulvihill as executive director for the Berthoud Area Chamber of Commerce (BACC). 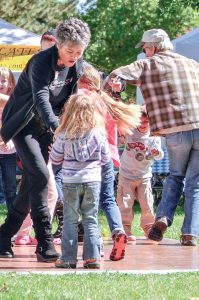 Berthoud Area Chamber of Commerce Director
Deanne Mulvihill dances with a young girl at a previous Oktoberfest in Berthoud. Mulvihill is in her fourth year as chamber director and memberships are stronger than ever.
Surveyor file photo

The BACC has seen a lot of growth during Mulvihill’s time as director. She says 107 members existed back when she started. Today the number is 275. The energetic leader has a goal of attaining 25 more members this year.

“They had a part-time director,” said Mulvihill, speaking of the BACC before she started. “I don’t know how anybody did this part-time,” she said. Mulvihill became the BACC’s first full- time director. “Instead of 20 hours a week, I have 40 hours,” she added. She acknowledged and thanked the chamber board of directors for making the commitment to a full-time executive director.

Mulvihill remembers when the part-time director left the board broke down the components of the operation. One took the lead on Berthoud Day, one for Oktoberfest, one to organize the luncheons, etc. They did this in spite of having their own businesses.

“I spent the first 30 days, not in the office but visiting with current members, members who had never joined and those who did not rejoin.” She asked them what they like, what they don’t, and what do you want to see changed.

The chamber offers many activities for members. Monthly, there are luncheons on the first Thursday of the month and Business After Hours on the third Wednesday of the month.

Mulvihill also started a Business Before Hours. These events occur quarterly in February, May, August and November. The morning event came about because Mulvihill heard from people who were too busy at their business to come to a lunch or had children so they could not attend an evening function.

Additionally, at least two ribbon-cuttings happen each month. Sometimes more are needed with so many businesses joining the chamber, she said.

Major events for the chamber are Berthoud Day, the quilt/art and craft show, an annual golf tournament, and the ever-popular Oktoberfest. Also, in January a celebration dinner kicks off the year and honors those who work and volunteer so hard for the chamber.

Overall, Mulvihill says the mission statement provides the path for the Berthoud chamber. She summarized it by saying the idea is to keep Berthoud strong and vibrant.

The mission statement also addresses supporting and promoting members, whether or not they have a business in Berthoud. Mulvihill noted the membership includes businesses from, not only Berthoud, but also Longmont, Loveland, Evans and Johnstown. “We are definitely an area chamber,” she said.
Mulvihill attends town board meetings when an issue is going to impact members. This is part of the chamber’s mission to serve as a voice to local government.

The chamber is charged with fostering a livable, progressive community. “That’s why we do the events,” Mulvihill explained.

Looking to the future, Mulvihill is optimistic.

“With the [Heron Lakes] golf course coming in — it is going to make a huge difference,” she said. She pointed out there will be many businesses near or around the new course. Mulvihill meets each month with Walt Elish, business development manager for the Town of Berthoud, to make sure the chamber is in touch with what is going on with the golf course and other developments in Berthoud.

Mulvihill sums up her first three years leading the BACC by saying, “We have always had incredible members. They just needed a full-time leader.”

She modestly states it was not so much her, but having a dedicated and focused leader that’s helped the chamber’s success.

“I didn’t make it happen. The people made it happen,” Mulvihill said.

She says she just directs people’s skills, goals and ambitions. She labels herself more of a tour guide. She sees what people wants and helps them get there.

Go to berthoudcolorado.com to find out more about the Berthoud Area Chamber of Commerce and its activities.