As a ‘50s-something author, David Besch can clearly recall many incidents of bullying, and found a way to move “From Bullied to Blessed.”

The first-time author published “From Bullied to Blessed, Keys to Overcoming Obstacles in Your Life & Learning to Enjoy the Ride” to provide tools to overcome abusive, controlling and bullying behaviors at school, home and the workplace. He published his religion-spirituality book in 2018 through WestBow Press in Bloomington, Ind. 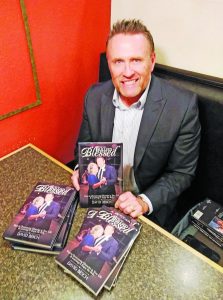 Photo by Shelley Widhalm – David Mesch shows copies of his book, “From Bllied to Blessed, Keys to Overcoming Obstacles in Your Life & Learing to Enjoy the Ride,” published in 2018.

“It really is an inspirational autobiography. It’s my story about how I grew up in the Midwest,” Besch said about being raised in the farmlands of Wisconsin, along with Pennsylvania and Texas. “I was a chubby little boy growing up, and my dad was also a (Pentecostal) minister, so I got teased a lot about that. Everybody’s got a story and this is my story.”

Besch weaves his story of being teased, bullied, beaten up and humiliated with faith-building scriptural truths. He explains how he almost committed suicide but found hope by choosing the empowered, overcoming mind of Christ rather than a victimhood mentality. He describes the different types of bullies that can be encountered, including classmates, teachers, spouses and managers, dedicating a chapter to each.

“I had to forgive people and release toxic emotions. I think it can be healing and restoration for other people if they read what I did to get there,” Besch said.

When Besch was in school Besch’s father told the principal about the bullying Besch had to endure, helping ease the situation, but today there is a greater fear of repercussions and retaliations for being a “tattletale,” he said.

“I went to school with a sick stomach because I didn’t know who would start calling me names,” Besch said.

In his book, Besch encourages his readers to not dwell on the past, but provides a way to deal with painful memories and emotions. He shows how to overcome the limitations of low self-esteem and reprogram thought patterns to healthy habits of thinking. He explains how to choose to forgive and to turn the other cheek — or “most of the time,” as mentioned in one of his chapter titles.

“I wanted to write it so people could overcome the pains and hurts from the past and not live with bitterness, grudges and guilt,” Besch said. “When I repeated positive affirmations, especially scriptures, it was life changing to me.”

Pastor Dieter Skowron of Abundant Life Tabernacle in Johnstown read the book and found it to be “transformative” and something that will give hope to others.

“I actually had a similar journey as his,” Skowron said. “Knowing David the way I do makes it even more precious to me. His book is insightful. It’s rich. It has a Biblical outline for healing, and that’s what I appreciate, the path to forgiveness, the path to self-confidence. … What I like is that you don’t have to become prideful or hateful, but you can forgive and gain confidence.”

At first Besch believed the names his bullies called him, but as a high school student he started dieting and working out in the school gym. With the dream of playing college football, he walked on to a team at Evangel University in Springfield, Mo., where he earned a degree in 1992 in fine arts with a concentration in graphic design. He later earned his Master of Business Administration in 2013 from Colorado State University.

The year he earned his bachelor’s degree, Besch moved to Colorado to be closer to the family of his wife Steffani, who he had met at Evangel. Married for 30 years, they have three sons who went through Berthoud schools, and their youngest is a senior at Berthoud High School. They lived in Berthoud for 11 years before moving to Mead 10 years ago.

Over the years, Besch worked in several careers, including telemarketing, real estate after earning a real estate license, and banking, which he has done for the past 23 years. He currently works at Waypoint Bank, a family-owned business with branches in Nebraska and Colorado, including the one in Loveland where he is the Northern Colorado market manager.

While getting involved in work Besch knew he wanted to write his book, a project he started six years ago and set aside, picking it up again two years ago, and he is at work on two additional book projects.

“I took it on because I have some firsthand experience of what it’s like, and I know what people are going through,” Besch said. “It’s the release and therapy to release something on my heart. … While I’m doing this, I’m praying God will use it to help somebody else.”

Besch aims to give in other ways, too. He serves as board vice-president of the House of Neighborly Service in Loveland and sat on the board for Project Self-Sufficiency in Fort Collins. He and Steffani, associate pastor at Rez Church in Loveland, have been involved in marriage counseling and have worked with youth at Rez. Besch also volunteers in the church’s music department, singing and playing the piano and organ, and leads worship for African-American churches in Denver.

Now that he has a published book in hand Besch plans to speak publicly to increase awareness and help prevent bullying at schools, churches and other places.

“Awareness and intervention are so key,” Besch said. “Every time we turn around, we have teen suicides and teen bullies. So many times it’s because they’ve been bullied and they have had enough. … Nobody deserves this. We have to come up with programs to help overcome this.”

Besch’s book can be purchased at major online retailers and at https://www.westbowpress.com/Bookstore/BookDetail.aspx?Book=756601.