A tale of hidden tunnels and sealed doorways – a Berthoud mystery

Halloween is the perfect time for scary stories, and who better to site than the master of the macabre, Edgar Allan Poe. In his short story, “The Cask of Amontillado,” a man who feels he’s been insulted one too many times by another man, decides to take his revenge in a sinister way. By luring the offender down into the catacombs below his Italian estate with the promise of sampling some Amontillado, a sherry wine, he leads the man to his demise. Once below ground, the offended promptly chains his inebriated “frenemy” to the wall inside a small alcove and proceeds to entomb him alive, bricking up the entry, explaining his body is still there 50 years later as the tale is being retold. It really doesn’t get much creepier than that. 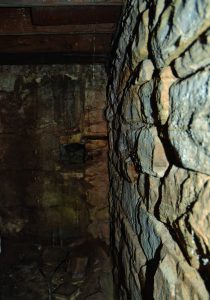 A hole in the masonry of a sealed doorway in the basement of the old Mason’s building on the corner of Massachusetts Ave. and Fourth Street reveals a possible entry point to a hidden tunnel that connects several buildings in Berthoud which might run under Mountain Avenue. What or who lays beyond the door is a mystery.

With that story in mind, we travel to present-day Berthoud to a tale of our very own subterranean tunnel and mysterious sealed doorways. There are certainly no catacombs below Mountain Avenue, but, according to some, there may be a hidden tunnel long forgotten.

Last October, during an ill-fated robbery attempt on the Subway sandwich shop at the corner of Third Street and Mountain Avenue, police found something unexpected. While attempting to locate the robbery suspects, a tunnel was discovered leading out from the basement of one of the nearby buildings. The would-be robbers were apprehended, but the issue of the tunnel piqued a lot of interest.

We at the Surveyor decided to investigate the tunnel story further to see what we could, dig up.

We began our journey at another location thought possibly to be connected to what the police discovered a few blocks away. Across Mountain Avenue to the north-west of the sandwich shop is the old Mason’s building, a red brick structure built in 1890, now home to Laughing Ladies Quilting on the corner of Fourth Street and Massachusetts Avenue – a locale which is also said to be haunted, but that’s a story for another day.

The old building is beautiful on the inside, with dark hardwood floors and vaulted ceilings. It’s a cheery space, brightly lit to showcase the large assortment of colors and patterned fabrics for quilting displayed on racks and shelves throughout the large open rooms. In the back of the building there is a trap door that leads to the cellar – a vastly different space from the area above it. When you descend the creaky, old wooden stairs to the dimly-lit, dirt-floored room below, you become keenly aware of the 127 years of history the building has passed through.

The air is stale and the cobwebs draped from the heavy exposed support beams, some reaching from floor to ceiling, look like over-done Halloween decorations as they quietly flutter in the air. As your eyes adjust to the darkness, the stone foundation comes into focus, illuminated by a few light bulbs – that subsequently kept flickering during our visit. In one corner of the foundation the stone and mortar are a different color from the rest of the masonry. The shape of what was once a doorway can be clearly seen.

The current owners of the building, Don and Chris Gischel, made a hole in this section over a decade ago, curious as to what was behind it. Air flowed through the hole and a dark corridor could be seen. Today the hole has caved in, but a slight draft can still be felt flowing through it out of the darkness beyond.

Our search then took us due south. Moving closer to the Subway building we visited the old United Brethren Church building on the corner of Fourth Street and Mountain Avenue. The building, also well over a century old, has a beautiful sanctuary with an arched ceiling and original wooden pews highlighted by the colored light streaming through the many stained-glass windows.

The basement of the church, accessed by a narrow spiral staircase, has been renovated with lighting and carpet for Sunday-school classrooms. The utility room, however, has the similar exposed stone foundation like the quilt store to the north. Along the wall in this small space a large piece of wood has been firmly secured to the foundation, covering up an entry and unfortunately producing another dead end to our investigation. There is thought to be a small corridor behind the barrier that leads to a room which is partially filled with a pile of dirt, whether it connects to a larger tunnel or what this space was used for is also unknown.

Our next stop was in a building south of Mountain Avenue. We contorted our bodies to get down another trap door – this one with a much smaller entrance. Again we went down into a dim, dirt-floored basement, with more than a hint of creepiness, greeting us below. This time, however, on the far side of the space was in fact the tunnel. A hole had been cut out from the stone foundation and a tunnel dug through the dirt large enough for a person to climb through, leading away from the building. Neither of the Surveyor staff on this adventure wanted to climb through the spider-infested tunnel. However, going back to the police investigation last year, a few of those brave souls did.

The best confirmation obtained in this investigation comes from an eye-witness report from Sergeant Jim Anderson with the Larimer County Sheriff’s Office Berthoud Squad. When police attempted to pass through the tunnel during the robbery, Sergeant Anderson said “There was so much clutter that we could not get very far,” he continued, “It would be fun to get a crew of volunteers to clean it out so we could walk the length of the tunnel. I see ghost tours in our future.”

Are all these locations linked by a tunnel; are they simply the old sewer system from a century ago; were they used to transport liquor during prohibition as some have suggested; or, like Poe’s tale of the ill-fated fellow entombed in the catacombs, is there a darker reason these tunnels were closed off for time to forget? We at the Surveyor cannot definitively say. What lies below ground under the streets of Berthoud will for now remain a mystery, but as you traverse those streets this Halloween you may be wise to consider what, or who, may be just below your feet.