All in the firefighter family 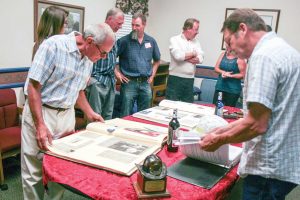 The event was a lighthearted, fun affair with frequent outbursts of laughter. The tone for the evening was set by BFPD Board President Dan Hershman when he noted in his introductory comments that in his 30-year association with the Berthoud Fire Department it was the first time he could remember a keg being allowed in the fire hall. The remark by Hershman brought a wave of hearty laughter from those assembled and a nod of affirmation from BFPD Chief Steve Charles.

At least one “cold case” mystery was solved during the evening. Jerry Ward stated newly revealed circumstances surrounding the unexplained disappearances of Colorado State Patrolman Pat Kissler’s favorite flashlight solved the case by pointing the finger of suspicion at the county sheriff’s department.

Each volunteer present, in turn, stood, introduced themselves, and shared any thoughts they might have regarding the experience of being a volunteer firefighter, which most of them did gladly. Some remembered those who were no longer with us – Bill Greenwell was mentioned more than once.

Most of the anecdotes shared by the volunteers were humorous. A few were emotional. All were heartfelt. They spoke of the close bonds forged between the volunteers and how much they became like a family.

As in any family there were plenty of opportunities for hijinks. Some of those stories were shared as well, but only those fit to share. Evidence of that fact was given by Charles when he stated he had remembered more details concerning an episode that had been shared earlier in the evening. He said he would not be reporting his recollections because “the media is here.”

“You’re off the record,” responded a media member.

“There is nothing off the record,” responded Charles, “I’ve heard that before.”

One interesting aspect was the number of times the chief’s name was mentioned as being involved in either the planning, the execution, or being the unsuspecting recipient of someone else’s careful planning.

The message that came out during the evening was this group of people honored each other’s service. They respected one another, and they shared some level of love toward the volunteers they served with.

Those who were available were invited to take part in the Berthoud Day parade, which took place the following morning. Arrangements had been made for a float they would be riding in the parade. Coins commemorating the 2016 event are available from any retired Berthoud volunteer firefighter for a nominal fee. Phone John Beck at 532-2654 for more information.

The next Berthoud Fire Department Traditional Volunteer Reunion is scheduled to be held June 4, 2021.