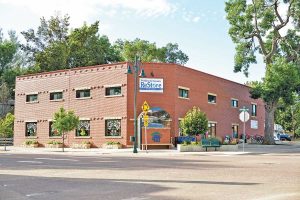 Sharon Derstine has only looked one direction for the past 10 years as the manager of the Berthoud Habitat for Humanity ReStore − forward.

Despite there being some trials in the first year, getting the store up-and-running, she’s managed to create not only a sustainable local retail business but has also helped create a gem for the community that helps recycle and reuse everyday household goods, clothing, and so much more.

“We just had to decide what we could do for Berthoud, what would sell, instead of trying to do everything like some of the other ReStores,” Derstine said. “Apparently, we carry a lot of what the Berthoud community needs.”

The ReStore, located at 157 Mountain Ave. in Berthoud, celebrates its 10-year anniversary on Saturday, July 18, from 10 a.m. to 2 p.m. with a storewide sale and festivities across Second Street in the park that will include free hotdogs, chips, soda, giveaways and face painting for the kids.

“We are so proud that we’ve made it 10 years in this community,” Derstine said. “We just want to say thank you to the community.”

Derstine opened the ReStore in 2005 in the old Berthoud Masonic Building at Fourth Street and Massachusetts Avenue, she said, after being asked by Peter Bridgman.

“That’s where we got started,” she said. And it was a lot of work.

“We started that first ReStore in the Masonic Lodge with nothing. Someone would donate a table and it was used to put merchandize on.

We scrounged together some of the most bizarre stuff to put in that store, but donations started flying in.” she said.

There were no paid employees besides Derstine that first year, but there were a few volunteers who helped out tremendously. Currently, the ReStore has seven paid employees, some part-time and some full-time, several volunteers and even a truck to pick up larger donations.

“I have an incredibly great bunch of people who help out,” she said. “I couldn’t do it without them.”

And she stated it’s a great place to work because every day is different.

“It’s fun. We love it. We enjoy what we do. Everyday it’s different because we don’t know what is going to come in the door.”

They’ve been in the new building, built specifically for the ReStore, five years.

“This [building] has just been a godsend for us because there really aren’t any large retail buildings in town,” Derstine stated.

The move to main street increased sales by one-third that first year, she said.

“That made a huge difference. It’s been a wonderful thing.”

Derstine remembers there being a lot of apprehension to open a ReStore in a town the size of Berthoud.

“‘You’ll get all the donations in one year and then there won’t be anything left to donate,’ is what they said,” Derstine said. But, that didn’t happen; the donations have only increased.

“Berthoud has been unbelievable to us,” Derstine said. “We have never run out of donations.”

It’s the community support that has made the ReStore so successful, she said.

“They donate. Without that, we wouldn’t have a store. They shop here. Our customers are here every single day. And we have volunteers from the community that help out.”

A couple of the volunteers have been there for the 10 years the store has been around, according to Derstine.

“It’s the first place that the community had where people could donate and the money stays in the community,” she said.

But the first year wasn’t easy. In fact, it was a lot of hard work and determination.

“It took us about one to two years until we were bringing in a good profit,” Derstine said.

Usually the ReStore brings in enough to build one house a year; this year they’re doing two.

“The store has been an amazing asset toward getting houses built for people in the community,” she said.

For the past 10 years she’s never looked back and it’s become more than she imagined.

“I never envisioned this,” she said of the ReStore’s current location and building. “I hoped for this, but it was a lot of work.”

Saturday is a ‘thank you’ to the community.

“A lot of people can’t believe we’ve been here 10 years. I can’t believe it; it’s a shock,” she said. “I think the fact that we’re a small community, a lot of businesses come and go, but we’re still going strong – we’re still here.”