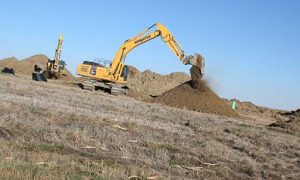 Construction is progressing on a regional collector line that will drain sewer from the Vantage, Hammond
Farms, Bader and Heron Lakes developments.
Becky Justice-Hemmann / The Surveyor

Berthoud to double in size when current developments build out

If you have done much driving around Berthoud recently you may have noticed quite a bit of heavy, earth-moving equipment (some people refer to it as “yellow iron” or “yellow metal”) at work in various locations around town, along with the large excavations which typically go with such pieces of machinery. More than 4,100 housing units in seven subdivisions currently under construction are in the works; that amount will nearly double the size of Berthoud in the coming years.

The following is a brief description of the subdivisions and other construction activity in and around Berthoud.

The Interstate 25/Highway 56 interchange area: As Town Administrator Mike Hart has stated several times, the key to development of this area was the construction of a 99,999 gallon-per-day satellite waste water treatment plant. The facility, which is located near the eastern boundary of the tract referred to as the I-25 Subarea, is capable of being expanded with modules as the need for additional capacity arises. (The I-25 Subarea includes all four corners of the interchange.) The plant currently serves the residences of the Serenity Ridge subdivision, and is greatly underutilized. However, with the completion of a Love’s Travel Stop in the southwest corner of the interchange, the amount of waste water being processed at the plant is expected to increase dramatically.

According to a report published on bizwest.com, the Love’s complex will contain a country store, fuel stations for large semi-trailer trucks, two fast-food restaurants, a 60- to 80-room hotel, tire-care center, and showers for truck drivers. In an email message Kealey Dorian, a spokeswoman for Love’s, stated construction of the complex, which is estimated to cost $7 to $8 million, is slated to begin in early 2017 and be open for business in late 2017 or early 2018.

The PrairieStar Development: Two phases are currently approved in this development. Plans call for 854 units, 388 single-family and 466 multi-family units, are planned at build-out. PrairieStar is located at the northeast quadrant of the intersection of Larimer County Road (LCR) 17 and Highway 287. According to partners Scott Sarbaugh and Richard McCabe, the PrairieStar project is not slowing down – and, in fact, has lots waiting for the builder, LGI Homes, to move up from the Longmont area to begin building in Berthoud. Sarbaugh said LGI Homes is currently building their “Terrata Homes” line of single-family residences at the Yeager Farms development in southern Longmont. He went on to say LGI has purchased 48 lots in PrairieStar, and the builder has expressed interest in building the Terrata line, which is their mid-priced product line, in Berthoud.

Sarbaugh stated they are working with commercial broker David, Hicks & Lampert Brokerage, LLC to sell their retail space. He went on to state they are working through issues getting utility

services to the site. However, the greater obstacle to overcome is the lack of residents in Berthoud. “The commercial developers see the residential activity that is taking place, but they want to see more rooftops before they commit,” said Sarbaugh “We have seen more interest from commercial builders. We’ve gotten interest from our gas station site.” The gas station is planned to be located at the southeast corner of the LCR 17/Highway 287 intersection.

A club house and outdoor swimming pool are planned amenities for the development. Housing types range from owner-occupied condominium units to townhouses to single family with an apartment above the garage.

In addition, Sarbaugh and McCabe are working as fast as possible to open another 19 acres for development. The area they are working on is not visible from LCR 17 due to the undulating topography of the site.

Richfield Homes, soon to be joined by LGI, are currently the primary builders on site.

The Heritage Ridge Subdivision: Developer is Arbor Capital Partners. Phase I is currently under construction on 170 approved lots with 494 total units, 64 of which will be townhomes, planned at completion.

High Plains is a relatively small project (approximately 24 single-family lots) located in the northeast quadrant of the intersection of Fifth Street and Spartan Avenue. Spartan Avenue is to be extended eastward from Fifth Street.

The Vantage Development: The developer of this project is Access Land Colorado, LLC. Vantage is comprised of two separate projects, the former Westhaven and Easthaven projects, which were merged into one development. Vantage is located in the northeast quadrant of the intersection of LCR 17 and Bunyan Avenue. Installation of infrastructure and earthwork is currently being done on the property. First homes are planned by the fall of 2017. The developer currently has 603 units plotted with 125 of these being townhomes.

The Hammond Farms Project: The developer for this project is Caleb Development, LLC. Plans are to have homes on the market in 2017. Phase I of the project has 86 lots approved with total buildout of 756 total units. Current development agreement has no set limit on how many will be multi-family units.

Heron Lakes Project: Developer is Heron Lakes Investments, LLC. Phase I of the project will begin in the spring 2017 according to Jim Birdsall of The Birdsall Group, and a partner in the project. Phase I of the development will include 450 units with 106 of these being townhomes along with 156 condominiums. The number of units planned at build-out is 1,256.

At last report work is moving forward on the golf course with six holes having been seeded and the grass is up. The focus of activity is completion of the maintenance building at the far northern end of the golf course adjacent to LCR 14.

Earthwork and installation of infrastructure have not yet begun in earnest on the commercial portion of the Bader property.

Journey Homes, the contractor for the Heron Pointe property, is moving quickly and has pulled permits for 128 multi-family units.
Becky Justice-Hemmann / The Surveyor

The Heron Pointe Subdivision: The residential portion of Heron Pointe is located in the southwest quadrant of the intersection of LCR 14 (also known as Campion Road) and LCR 17 (also known as South Taft Avenue). According to Sue Bowles, planning technician for the town, the builder, Journey Homes, has pulled building permits for all of the multi-family dwellings of the subdivision (10 8-plex units and eight 6-plex units for a total of 128 units). Construction activity on the multi-family buildings is progressing at a feverish pace. During a chance meeting and brief conversation with Bob Dehn, developer of Heron Pointe, he stated he could not believe how fast Journey Homes was putting up the buildings. At build-out 315 total units are with 128 of these being multi-family.

Work has not yet begun on the commercial portion of the project, which will be located to the east across LCR 17.