Who can sing cowboy songs and shoot a gun?

By D. W. Herman
Special to the Surveyor 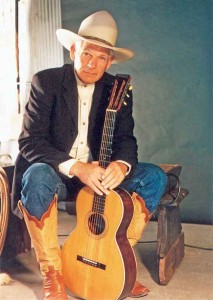 First the Saturday afternoon “B” Western disappeared, without fanfare, from the silver screen. Eventually, Roy Rogers, Gene Autry and Rex Allen all left this world for greener pastures. As far as anyone could tell, the era of the singing cowboy was all but over.

Then along came Don Edwards.

“The first song I learned to sing and play on my guitar was “Whoopie Ty Yi Yo,” Edwards said recently in an interview. “I was 10 years old, and my dad would play that record over and over again. I couldn’t get enough of it. I guess that’s when the cowboy bug hit me. And I guess I’m still not over it.”

Edwards, who performs this Sunday, Aug. 24, at the 12th Annual Farm Concert, left his Yankee home in 1959 for the wide open spaces of Texas. A music opportunity was waiting for him at the Six Flags Amusement Park in Arlington.

“They asked me if I could sing any cowboy songs and shoot a gun,” Edwards said with a chuckle. “Fortunately, I could do both.”

Edwards honed his performing skills at the park and expanded his song list, spending every moment of his spare time researching the traditional cowboy songs and singers. Then a student of the genre, Edwards is now considered a worldwide authority and historian anywhere boots and hats and a good horse are involved.

“Like any traditional art form, you’ve got to study every detail of cowboy music if you plan to do it right,” Edwards said. “You can’t just perform it. You’ve got to know it and live it.”

And Edwards does. A Texas rancher in his spare time, Edwards attracted the attention of actor/director Robert Redford in 1998 as Redford was developing a movie called “The Horse Whisperer.” Redford was looking for a real singing cowboy to play the part of Smokey − the hired hand to Redford’s character Tom Booker.

“I’d met a fellow named Pat Markey out on the road and had given him a couple of my CDs,” Edwards said. “Little did I know that he was associated with Redford. He and Redford were out one day scouting locations for the movie and Redford told Markey what he was looking for in Smokey. Pat reached for my CD in his briefcase and stuck it in the car player. Redford said, ‘That’s the guy I want. Find him.'”

“I was doing a festival in Santa Clarita, Calif., and I got a call to drive down to Santa Monica to read for the part. I figured it would be one of these Hollywood ‘cattle calls’ where everybody and their dog shows up. But when I got to the place, I thought it was a hoax. I was the only guy there! I didn’t know at the time, but Redford had already made up his mind.”

Along with his acting credit, Edwards landed a couple of songs on the soundtrack album. But he was far from done with his efforts to bring cowboy music to the masses. In 2001 Edwards partnered up with some of the bluegrass world’s greatest performers; including Peter Rowan, Norman Blake and Tony Rice, to record the album “High Lonesome Cowboy.” It earned the assembled pickers a Grammy nomination − a first for traditional cowboy music in the history of the recording industry.

And in the 2005 movie “Grizzly Man,” a docudrama following the life of grizzly bear enthusiast Timothy Treadwell, Edwards sings his signature song “Coyotes” over the closing credits.

“It was Tim’s favorite song,” Edwards said about the main character who meets his demise at the paws of the very animals he’d befriended. “He sang it morning, noon and night.”

“I guess that just goes to show that you never know who’s listening to your music.”

You can hear Edwards, along with Katy Moffatt and Reckless Abandon, at the 12th Annual Farm Concert just east of Berthoud this Sunday. For information, go to www.rangerstationstudio.com or call 303-915-5725.