The idea of the 10th annual Berthoud Bash is to bring students into the future, while letting the adults celebrate “Making History.”

Tickets are now on sale for the Berthoud Bash, an annual fundraiser organized by the Berthoud Schools Fund — this year’s event will be April 7 at Grace Place, with early ticket pricing through March 7. The Bash will present an evening of dinner, silent and live auctions, and entertainment to raise money for Berthoud schools for technology and classroom purchases. 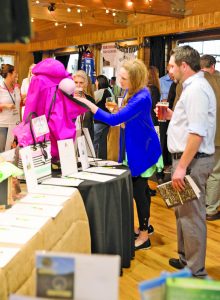 Guests of the 2017 Berthoud Bash enjoy the entertainment and festivities of the annual fundraising event, which includes dinner, a silent and live auction, and other activities. This year’s Bash will be April 7 at Grace Place.

“We all get together for a really fun time to find creative ways to support our schools,” said Hawley Vining, event planner for the Berthoud Bash and a Berthoud resident.

The Bash will have a new feature of a pre-Bash reception, 4-5:30 p.m,. for socializing and celebrating the event’s history. There will be a special recognition of nine longtime educators who taught at Berthoud schools for 30 years or more and 12 distinguished Berthoud High School alumni who graduated from 1955 to 1999 and succeeded with their degrees.

“This year we are excited to celebrate the history of the Bash and what it’s done for our schools,” Vining said. “It’s our little twist of celebrating our history, the past, present and future.”

The main event will begin at 5:30 p.m. and will include dinner, silent and live auctions, and a dessert dash, with the highest donors gaining priority at the dessert table. The silent auction will have more than 200 donated items, including baskets and entertainment, and the live auction will have 20 or more items.

The Bash outgrew its location last year at the Brookside Gardens Event Center, when the event sold out with 300 people attending.

Previously the event was held at Embassy Suites in Loveland, but organizers wanted to keep the event local and chose a larger venue for this year’s event, Vining said. The hope is for an attendance of 350 this year.

The Berthoud Bash raised $150,000 last year and $1.2 million over the past nine years, alongside donations from matching donors, such as the Doyle and Luvesta Frances Jones Fund. The money that is raised is used to purchase additional technology and instructional tools beyond what is provided by the Thompson School District.

“Particularly in the last decade or more when Thompson School District funding has been dropping, it’s been more difficult for the district to keep schools up-to-date, particularly in technology and instructional resources,” said Stuart Boyd, a board member for the Berthoud Schools Fund and a retired BHS English teacher. “We want to be able to give Berthoud students as much of an advantage as possible when they go to college and enter the workforce.”

A primary focus of the Bash is to ensure students have daily access to computers. So far, 1,200 computers and tablets have been purchased for classroom and computer lab use. Over the past three years the purchases have been focused on Google chrome books for their affordability and portability to get computers on each student’s desktop.

“We’re always looking for the next thing that makes sense that is going to keep our classrooms up to date,” said Davon Cook, treasurer of the fund. “The reality with Thompson School District is state funding has been underfunding the budget. Our role with the Berthoud Schools Fund is to jump in and fill that gap so our Berthoud schools stay at the cutting edge of technology.”

The fund met its goal to get computers to every student and now aims to replace computing devices every five years to keep the tools updated, Cook said.

The Bash also raises funds for other purchases for schools, such as investing in the robotics club at BHS, the Science Technology Engineering and Math, or STEM, lab at Ivy Stockwell, the maker space at Turner Middle School (TMS) and the greenhouse at BHS. The fund also provided for the purchase of 37 Promethean white boards for each classroom at all of the Berthoud schools. Other purchases include an auditorium upgrade; a remote learning lab; club support; document cameras, camcorders and video equipment; 3D printers and other maker space equipment; science kits; and art tablets.

The funds get allocated based on recommendations from each of the schools. The principals at Ivy Stockwell and Berthoud Elementary schools, TMS and BHS talk to teachers and staff to identify classroom and building needs and submit the request to the Berthoud Schools Fund.

“Being able to raise over $1 million in 10 years, that’s absolutely amazing. That needs to be celebrated,” Vining said. “It’s astounding how supportive families are and how much they really care.”

Tickets for the Berthoud Bash can be purchased at berthoudbash.org. Early ticket pricing is $60 through March 7, when the price will go up to $70. Tickets must be purchased by March 31.