Cheryl Mlcoch of Berthoud set aside her dream of building a trauma healing center, and Michelle Chavez of Milliken came up with a new dream following the death of her son by suicide.

The two met in October 2017, and over the next few months created Andy’s House, A Healing Center, a nonprofit organization with the mission of helping teens struggling with thoughts and previous attempts of suicide. They applied for nonprofit status, which they are about to receive, and in November 2017 launched a fundraiser to cover the initial costs. 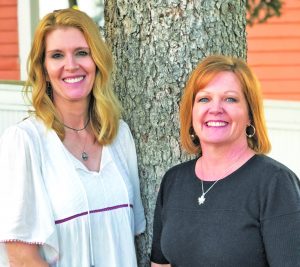 Photo by Shelley Widhalm – Cheryl Mlcoch, left, and Michelle Chavez are the founders of the nonprofit Andy’s House, A Healing Center. They are looking for a property to launch the center.

“We’re trying to create a healing center that feeds the mind, body and spirit,” Mlcoch said, with Chavez adding, “which is where trauma hits.”

Mlcoch and Chavez seek a property for the healing center, which will combine traditional and nontraditional therapeutic approaches and offer a range of programming, education and support for teens, ages 13-19, and their families for free, or a nominal donation.

Chavez, a family nurse practitioner of 30 years, is the founder and executive director of the center and is finishing a course in animal-assisted therapy, which will be one of the program offerings. The center is named after her son, Andy Stein, who died by suicide at age 22 on Sept. 1, 2016.

Mlcoch, a licensed professional counselor with experience in complicated grief counseling, is co-founder and program director of the center and owner of Wounded Healer Counseling in Loveland.

Ideally, Andy’s House will encompass a main building with an arena and stalls for equine-assisted therapy and a garden for horticulture-based therapy involving growing and cooking foods. The building preferably would be large enough to house a healing center with rooms for art and music, as well as a group room and an exercise area. The model for the center will be non-medical, and it will take a nontraditional approach by including the families.

Chavez and Mcloch want to locate the center in Larimer County, with their first choices Berthoud and Loveland. Depending on what they find, they will buy or build and are seeking a donated or a low-cost property.

Additional programming will feature art and music therapy, trauma-informed yoga and meditation, energy healing, horticulture and group work. The programs will bridge the gap that traditional medicine is not providing and help teens and their families learn how to cope with their emotions and express and manage their feelings.

“We need to find more ways to help these kids, because what we have is not enough and it’s not working. It is increasing to an epidemic level,” Chavez said on the Go Fund Me page for the project, https://www.gofundme.com/myandyshouse.

The philosophy of the programming is to offer teens and their families a connection to the body, healthy relationships, the earth and the community, and to transform their pain into power, as stated on the website for the center, www.andyshouse.live.

“Group work is a chance to bring the kids together to create connection,” Chavez said. “That’s the disconnect that’s happening with kids and families. … These kids are lonely and think they’re the only ones who are suicidal and trapped in loneliness.”

Chavez and Mlcoch developed the philosophy based on their personal experiences. Chavez spent years navigating the mental health system trying to get appropriate help for her son, but found it to be lacking. She wanted to honor her son, find joy again, and help others.

“At the one-year mark, I was really depressed, and I sought out counseling. That’s how I met Cheryl,” Chavez said.

Mlcoch, who had moved her family to Berthoud in January 2017, had spent 15 years as a counselor, including working in private practice and, as a survivor of childhood trauma, wanted to offer something beyond traditional therapy. She did not meet anybody who had the same desire as she and was ready to give up until Chavez came to her office. They went through two counseling sessions and decided to not meet in those circumstances and form a partnership instead. They combined Mlcoch’s programming ideas and Chavez’s desire to offer animal-assisted therapy into their idea for a healing center.

“She reignited that fire in me I thought I’d lost,” Mlcoch said. “We both understood each other. We’ve been through a lot of trauma. And our hearts combined.”

The timeline for the opening of the center will depend on when Mlcoch and Chavez can find a property. They will begin with volunteers and then add staffing as the center grows. The center will be funded through grants, donations and fundraisers, beginning with a silent auction in the fall, along with a community yard sale and suicide walk as the initial fundraisers.

“We’re doing something that’s needed and not out there,” Mlcoch said. “Helping families is unique, and doing these approaches is unique and definitely needed. Taking a pill and seeing a counselor is not enough.”