In the wide world of sports, rugby is one that flies under the radar, at least in the United States. Yet the sport is one of the toughest, most mentally demanding and physically challenging out there. With the physicality of football and the nearly non-stop movement of soccer, the sport can only be played by those who are in top-notch physical shape. 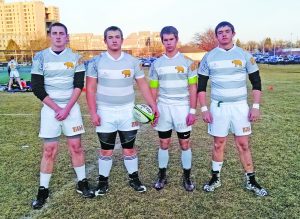 Kevin Kingston was initially introduced to rugby in the early 1990s when he was serving in the United States Air Force in Operation Desert Storm. After retiring from active duty, Kingston attended the University of Northern Colorado (UNC) in Greeley, where he played on the men’s rugby team and later coached the women’s team for three years.

Last summer Kingston was introduced to Chris Woodward, head coach of the UNC men’s and Weld Youth Rugby. Kingston joined Woodward in coaching four youth rugby teams; under-12, under-14, under-15, and high school. The high school and under-14s both won the Colorado state championship last year, and the under-12 team finished as state runner-up. The current high school 15s team (a rugby format with 15 players on each team) with the four Berthoud student athletes, is preparing to begin their 2018 season.

Rugby is played and practiced regardless of the weather conditions; there are rain-outs in the game, and a match or practice would only be rescheduled if snow prevented the teams from getting to the game or practice site. Weld Rugby practices for two hours on both Tuesdays and Thursdays at UNC, often practicing with the UNV men’s and women’s rugby teams. Home games will also be played at UNC under the lights on Friday nights (see the full schedule below).

There are currently 24 registered high school rugby teams in Colorado, split into division one and division two. Weld Rugby is currently playing in division two, as they are a new team and are looking for more players. Additional information can be found on their Facebook page, Weld Rugby, as well as on the Colorado Rugby website at www.coloradorugby.com.

*April 7 at Summit, at Aspen (tournament) in Breckenridge, Colo., TBD