Montano has been active in the Berthoud Chamber of Commerce and actively seeks ways to give back to the people of the town. One example of Montano’s giving spirit is his yearly donation of a truck load of turkeys at Thanksgiving to anyone who may be in need; passing them out in front of his restaurant. He has employed many high school students over the years and is known for instilling a strong work ethic in those he hires. He has also worked with the high school to provide pizza for many school and athletic events, and was awarded Berthoud’s Citizen of the Year in 2014. 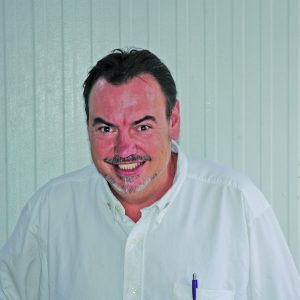 Montano has helped the community in the past. And now a group of Berthoud community members feel it’s their turn to help Cliff out.

On April 30, beginning at 5 p.m., what organizers have dubbed “Cliff’s Crusade” will take place at Grace Place Church, 375 Meadowlark Dr. This fundraiser will include a spaghetti dinner, a silent auction, and a concert. The goal for the fundraiser is $50,000, which will cover recovery and medical treatments Montano will be seeking outside of the U.S., as well as travel expenses.

Suzanne Doles, also a local business owner and the executive planner for the Berthoud-based nonprofit organization Let’s PLANet Giving (LPG), knew she wanted to be involved in helping once she heard the news. “Cliff is a longtime member and a great friend to all of our community. He has given tremendously and helped so many people and is always there when someone needs his support,” she said.

Community members, organizations, and local businesses have rallied to help the cause so far by making a variety of donations. The space to hold the event itself was donated by Grace Place church. Deb Kilde is donating 120 pounds of pasta as well as spaghetti sauce for the dinner. The Knights of Columbus, of which Montano is a member, will be preparing and serving the food. Origins Catering will be donating salads and RISE Artisan Bread is donating all the bread for the event. To finish the meal on a sweet note, B Sweet Cupcakes will donate dessert, including brownies and cupcakes.

The silent auction will take place from 5 to 6:45 p.m., with all the proceeds going toward Cliff’s medical treatment. The big ticket items so far are a football autographed by Denver Broncos Star Von Miller, as well as a “firehouse feast” with all the trimmings at the Berthoud firehouse, and two trips on a firetruck to school. There will also be pool passes, massages, gift cards, transportation certificates, tickets to sporting events, themed baskets, and much more.

Finally, attendees will also get to enjoy a concert set to begin at 7 p.m. from the band, FACE, an all-vocal rock band from Boulder. The group is internationally acclaimed and has been captivating audiences for over a decade with their infectious energy and their love of performance. This won’t be the first time FACE has performed in Berthoud, as they also performed at a fundraiser for Ivy Stockwell Elementary School last year.

“It is our mission at Let’s PLANet Giving to help those in need and those who are struggling. It is our honor to help Cliff with his recovery and medical treatments. We need to raise $50,000 in the next few weeks so we can send him to Mexico for his aggressive cancer treatments.”

Tickets for Cliff’s Crusade are $30 for adults and $25 for students. They can be purchased at www.letsplanetgiving.org. Those seeking to sponsor the event, donate to the silent auction, or have any further questions should contact Doles at 970-203-5884 or visit www.letsplanetgiving.org. Organizers will also be at City Star Brewing Friday, April 20, from 4 p.m. until 6 p.m. to collect silent auction donations and will also be selling tickets.

A fund has also been set up for Montano at Guarantee Bank in Berthoud. Monetary donations can be given at the bank by making checks out to The Cliff Montano Fund, or anonymously by a cash donation.

Amber McIver-Traywick contributed to this story.