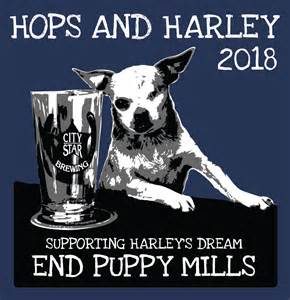 Hops and Harley will takeplace on Saturday, June 23,at Fickel Park in downtownBerthoud, just three blockswest of City Star Brewing. It’sfree to attend, and there is funfor the whole family.What are hops and who is Harley?
Harley’s story is one of rags to riches. Harley spent 10 years suffering abuse in a small cage in a puppy mill, never knowing the touch of a kind hand … until he was rescued and found a loving home. During his five years of freedom, this tiny Chihuahua raised more than $1,000,000 to set free and care for puppy-mill dogs. He educated and inspired people world-wide, teaching them they too can make a difference. Harley’s Dream was established in 2016 to create awareness and educate the public about the commercial dog-breeding industry, also known as puppy mills. They believe a grassroots approach by large groups of concerned citizens is the most effective way to bring about change. Their focus is to encourage advocacy by providing the tools necessary to educate children and adults alike.

Hops are one of the main ingredients in beer. As you’ll find across the world, many craft breweries love to find a local cause they can get behind. For City Star Brewing, helping Harley’s cause was a no-brainer.City Star hosts this major event in Berthoud,which not only raises awareness about puppymills, but also offers folks a great time.

What to expect at Hops and Harley Dog-loving people, live music, craft beer, and more. The Wendy Woo Band and South to Cedars will be performing on stage. Other events throughout the day include a grain-sack race and
other contests; including Shoes and Brews DogJog, Mile High Harley-Davidson “Hogs for Hops and Harley” ride, ceramics and paint studio with Glass of Art, Wildfire Community Arts Center kids area, a wide offering of food trucks, activities for children and dogs, photo booth, puppy-mill education, and of course…. great craft beer. City Star Brewing will be pouring a variety of beers, including Harley’s Honey Wheat, and Spirit Hound Distillers
from Lyons will have cocktails crafted with their award-winning spirits. There are several components coming together for a great cause. The music, beer, food and family fun will make for a wonderful event. Hope to see you there.

More information about Hops and Harley can be found at www.hopsandharley.