Two cashiers at Hays Market launched a GoFundMe fundraiser for their coworker Joel Werner and his wife after they got in a car accident—and the Werners won’t know about it until their expected arrival home on Friday. 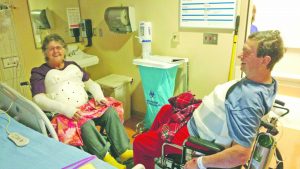 Berthoud resident Renee Werner, left, and her husband Joel, are in a rehabilitation center in Johnstown following a car accident in late November.

Amy Baskall and her daughter, Josie, a junior at Colorado State University, created a fundraiser for the Werners in hopes of raising $5,000—so far, they have raised $4,340. The fundraiser is “Joel and Renee’s Medical Fund” at https://www.gofundme.com/joel-and-renees-medical-fund.

“I want to show Joel and Renee they are loved, that we miss them and want to try to help out every way we can,” said Amy, who, along with Josie, is from Berthoud. “We’ve raised a lot of it. Hopefully, we’re going to go past $5,000.”

The Baskalls began the fundraiser Dec. 4 to help the Werners with their medical expenses and loss of earnings from Joel being unable to work during his recovery process.

The Werners were involved in a single-vehicle accident Nov. 21, two days before Thanksgiving, at Taft and Mountain avenues that totaled their truck and resulted in several injuries. Joel has a broken back, ribs and other injures, and Renee has two broken wrists and broken ribs. They went to separate hospitals for immediate care and followed up with rehabilitation at a rehabilitation center in Johnstown.

The Werners, who have Medicare insurance, already faced financial issues from Joel’s quadruple bypass surgery 17 years ago and will have additional bills with their recent surgeries, Baskall said.

“Even with that, there still is not enough to cover all of the expenses from something like this,” she said about their insurance.

Baskall doesn’t want the Werners, who live on a tight budget, to have to worry about their bills on top of their recovery process, she said.

“I’m hoping whatever we’re able to raise will help out,” she said.

The staff and customers at Hays Market miss Joel, Baskall commented. He has worked at the store for 12 years after retiring from a 30-year career of delivering milk, she said. Renee worked at A&W Restaurant and also is retired, she said.

“Everyone who comes into Hays knows Joel for being friendly, smiley and a little silly at times,” as stated on the GoFundMe write-up. Baskall remarked that, “Joel knows every customer’s name and treats coworkers and customers just like family,” she continued,

“Joel is beloved by everyone he meets.”

“He’s such a caring, outgoing guy. He jokes with everybody,” Baskall said. “He’s a really great guy. … Joel is one of those kind of people you meet once and remember him.”

Donors can donate at the store—so far, nearly $100 has been raised—or by directly contacting the Baskalls on Facebook.

Friends and neighbors are helping in other ways, too, such as caring for the Werner’s cat, taking in the mail and checking in on their house, Baskall said.

The Baskalls hope to give the Werners the GoFundMe and other donations before Christmas.

“I don’t think they know anything about it,” Baskall said. “We want it to be surprise.”