Berthoud woman to compete in Special Olympics USA in 2018

Special Olympian Kayla Fast of Berthoud plans to run the 100- and 200-meter dash for her late Aunt Donna Glodava.

Fast, 25, is one of 25 athletes who will be part of Team Colorado in the 50th annual Special Olympics USA Games on July 1-6, 2018, in Seattle, Wash. More than 3,500 athletes will compete in the national games for the Special Olympics, which is held every four years. Team Colorado will send athletes in the areas of track-and-field, aquatics and soccer. 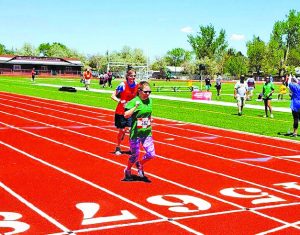 Fast told her aunt she will win in her honor after winning first place in both the 100-meter and 200-meter dash during the regional Special Olympics in Brighton on May 13. She saw her aunt, who lived in Arvada, on race day on a Saturday, and her aunt, who had cancer, died the next Tuesday.

“It kind of sparked her a little and gave her incentive,” said Fast’s mother, Charlotte.

Fast has autism and a pervasive learning disability, or delayed learning, Charlotte said.

“She wanted something to do. She has coordination problems with playing ball, but she likes to run,” Ken said.

Fast, who is four foot, nine inches, ran track in elementary school but not in high school. She practices once a week with the Fort Collins Special Olympics team, known as the Dream Team, to prepare each year for the regional and state competitions. The team generally practices in the spring, but will begin practice sooner, in mid-winter, for the national competition.

“I’m really good in track. I really like to run,” Fast said. “I’m running for myself.”

She said she enjoys the challenge of running and of competing.

“It makes me feel good about myself,” Fast said.

Ken said Kayla’s biggest challenge was staying within the lines of her lane at the curve of the track where the lines overlap. 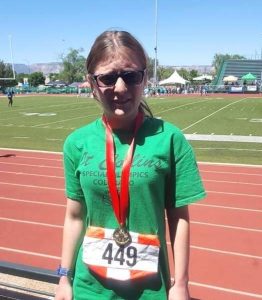 Kayla Fast poses for a picture with her metal after a race.

Charlotte pointed out that Kayla feels bad she made it to nationals when, as she told her mother, other athletes were just as deserving and had been competing longer than she has.

“She’s really fast. Once she gets going, she takes off,” Charlotte said. “It’s her determination.”

That determination has helped her in life too, Ken said.

“She’s had a lot of obstacles to overcome growing up,” Ken said. “She never gave up.”

Fast, a 2011 Berthoud High School graduate, worked as a dietary aide for two to three years at the Berthoud Living Center. For the past two years she’s worked at the Loveland Habitat for Humanity ReStore through Easter Seals Colorado Wings in Loveland.

“I like it because I can socialize with my friends,” Fast said.

The Fasts will do a fundraiser for Kayla’s trip to the national competition once they get the fundraising information from headquarters. Those interested in donating can contact Charlotte at [email protected].

Charlotte wanted to thank Kayla’s coaches and the volunteers who help with Special Olympics for making this opportunity available for her.