Susan Kaczmarek got the phone call that every parent fears might one day come. A social worker from Medical Center of the Rockies contacted her early on a Wednesday afternoon on August 1 and told her that her son, 13-year-old Dakota Haas who was out riding his bicycle had been in a serious accident. Susan did what any parent would do and immediately asked if her son was alive, the woman on the other end of the phone wouldn’t answer except to say she needed to get to the hospital and suggested that someone should drive her. 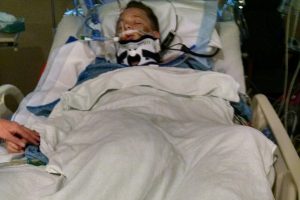 Courtesy photo – Dakota Haas, 13, during his initial days at the hospital recovering from being hit by a van while riding his bicycle in Berthoud on Aug. 1, 2018.

Susan and her husband Frank had just finished building a beautiful new home in a development north of US Highway 287 in Berthoud a few weeks before the accident. As the family was settling into their new home they were made aware that Dakota would not be bused to Turner Middle School for the fast approaching school year due to their home’s location. That August morning Dakota decided to ride his new bike that his mom and stepdad had purchased him 18 hours before to the school for a test run. As Dakota was crossing US Highway 287 a van traveling 55 mph struck Dakota as he traveled south on Berthoud Parkway.

When the call came in about the accident Susan described what happened next, “Shear dread – I said is he alive she wouldn’t tell me, I got in my car and called my sister she said is he alive, I said I don’t know,” Susan’s husband Frank was at work and there was no one nearby who could drive her to the hospital. Susan arrived at the hospital and was taken to where her son was being treated, “He was laying in the bed,he had a bolt in his head, he was covered in road rash, he had three broken ribs, he had broken fingers, a blood clot on his brain, his skull was fractured and he had a brain bleed, there was a compound fracture in his leg, the bone was sticking through his leg – my baby was tore up, I wouldn’t wish seeing their child like that on anybody.” 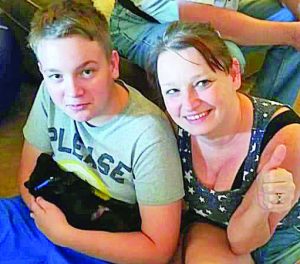 Courtesy photo – Dakota Haas, 13, and his mother Susan Kaczmarek sit together with the family’s new German Shephard puppy that will not only be a companion but will also be trained as a therapy dog for Dakota as he recovers from severe injuries sustained after being struck by a van while riding his bicycle on Aug.

Dakota remained on life support for two days at Medical Center of the Rockies where doctors believed a chest tube and brain surgerywere going to be required to try to save his life. The decision to transfer him to Children’s Hospital in Aurora, Colo. where he couldreceive specialized care was made. Dakota remained at the hospital in Aurora for nearly a month. Susan never left his side, even sleeping, when she was able to, on an inflatable mattress on the hospital floor.

Despite the fact medical staff at both hospitals wouldn’t give Susan or Frank the odds of Dakota even surviving his injuries Susan said after a few days in the Intensive Care Unit at Children’s Hospital, “He got better real quick thank God, he just perkedup and gotbetterreal quick – he doesn’t remember anything during that time.” And on August 10, Dakota began to speak.

Susan explained that Dakota has wanted to be a police officer since he was two-year-old and for years that was his Halloween costume of choice. Police officers from the Larimer County Sheriff’s Office, including Student Resource Officer at Turner Middle School Deputy Kevin Kingston who was initially called in to identify Dakota at the hospital, and the Loveland Police Department, where Dakota is a member of the Police Explorer Post, a group that offers career orientation for young adults interested in pursuing law enforcement professionally, came to visit Dakota at the hospital. “They had to come up in four groups there were so many of them that came to see Dakota everybody has been so excellent to us,” Susan said of the outpouring of support from police and also Turner Middle School.

Kingston who has continued to be a support to Dakota and his family said, “When I first saw him I was unsure if he was going to make it….After seeing him in the hospital on a regular basis I was watching a true blessing unfold in front of me. Every day he was getting stronger and better. Now less than two months go by and I have full walking and talking conversations with him. It is a true blessing. He is a strong young man.” 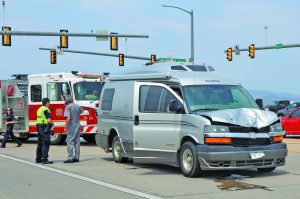 Photo by Becky Justice-Hemmann – The van that struck Dakota Haas on August 1, 2018.

Dakota’s physical body is on the mend but the traumatic brain injury, called a Diffuse Axonal Injury (DAI), has a long list of side effects including behavioral and cognitive concerns along with the fact that even a slight blow to the head could be fatal.  According to HopkinsMedicene.org, recovery from a DAI, which has less than a 90 percent survival rate, often involves prolonged or lifelong processes of treatment and rehabilitation. Unfortunately, it was discovered that Dakota’s health insurance coverage had been canceled at the end of June as his biological father was carrying his coverage resulting in enormous and mounting medical bills. “We still have a lot of bills, not even from just the hospital but he needs speech therapy for the next year at $200 a session, he needs physical therapy once he’s cleared to put weight on his legs, we’re going to have to go back to Children’s every three months,” Susan said after saying the two days in Medical Center of the Rockies totaled $82,000 – the bills from the month at Children’s Hospital hadn’t come in yet.

The family will be hosting a garage sale on September 28 and 29 from 8 am to 6 pm at 744 Ranchhand Dr. in Berthoud to help cover some of the medical expenses. The GoFundMe page is also still available for those interested in helping support the family at gofundme.com/4r72sd-please-help-my-son.