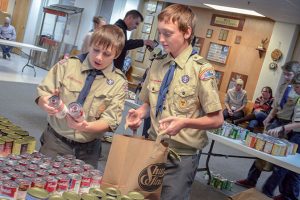 Boy Scouts Ty Rotar, right, and Martin Juhasz discuss what type of soup to place in one of the Thanksgiving baskets that the Boy Scouts and Girl Scouts prepared for local residents at the Berthoud United Methodist Church Monday night.
John Gardner / The Surveyor

House of Neighborly Service has provided assistance to Berthoud’s most vulnerable residents for the past 55 years.

One of the organization’s clients who wished to remain anonymous, we’ll call her Sally, has depended on the organization for her most basic needs since moving to town four years ago.

Before moving to Berthoud, 59-year-old Sally and her husband lived in southeast Boulder, where Sally said they enjoyed upper-middle-class status. She an office manager; her husband worked in plastic production.

But bad things tend to come in threes, and they certainly did in Sally’s case. Shortly after being laid off due to the sale of the business she worked for, Sally’s health declined. She suffered from hip surgery complications and worsening vision and gastrointestinal issues. To make matters worse, her husband, sole breadwinner for the couple, suffered a debilitating heart attack around the same time.

Both unable to work, Sally and her husband were forced to sell their home and move to a mobile home in Berthoud.

While her husband receives a small stipend for disability, Sally has been turned down twice in the last 33 months and said she’s running out of options.

“After we pay rent and bills with my husband’s disability we have $53 left each month for all things non-food,” said Sally. “We’ve let so many things go: oil changes, a new roof, new paint, a new dryer. We just can’t do anything.”

Their closest relations being third cousins across the country, the couple’s lifeline these days is House of Neighborly Service.

Scouts provide for the holiday

Among other things, House of Neighborly Service provides a week’s worth of groceries to its clients each month. In November that grocery bag includes all the fixings for a Thanksgiving feast, thanks to the Berthoud Boys and Girls Scouts troops. This month, 45 local families in similar situations to Sally’s will enjoy a traditional holiday meal–the highlight of the month for Sally and her husband.

It all began nearly a decade ago, with Laurel Downer, former committee chair for Boy Scouts Troop 6, and Linda Hirsch, retired manager of Berthoud’s House of Neighborly Service.

“I felt the troop could help the community in a creative way,” said Downer. She said when she approached the other committee members, as well as Hirsch, they all agreed that providing Thanksgiving meals to those in need would be a beneficial way to give back.

Today, despite changes in leadership both within the Boy Scouts troop and the House of Neighborly Service organization over the years, the program lives on and is more important than ever.

What started out as a 30 basket a year commitment has steadily increased as the need has grown over the years. According to Sarah Smith, current Thanksgiving basket coordinator for Boy Scouts Troop 6, the troop is now up to 40 baskets, all of which are provided by the 30 scouts in the program and their families.

“The troop buys the frozen turkeys using the funds we raise from our annual pancake breakfast during Berthoud Days,” said Smith. “I make a list of all the other items that are needed and send it out to our troop.”

Smith said the troop meets each year on the Monday before Thanksgiving to bring in items and assemble the baskets. They deliver them to House of Neighborly Service the following day just in time for clients to pick up.

Each basket includes all the staples of a Thanksgiving meal: a turkey, mashed potatoes and gravy, stuffing, canned corn, green bean casserole ingredients, a pie crust and pumpkin pie filling, cranberry sauce, and a can of condensed milk. 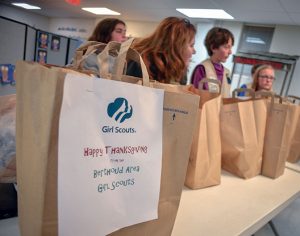 After sporadic involvement over the years, The Girl Scouts Berthoud Service Unit recently took on a more active role in the Thanksgiving basket program.

Jen Rotar, a leader for Girl Scouts Troop 700, said she encouraged the girls to become more involved with the baskets when her daughter joined the scouting program two years ago.

“I have a son who’s been a boy scout for seven years, and I’m a committee member with his troop,” she said. “Since becoming a Girl Scout leader I’ve tried to help get our service unit more involved.”

The girl scouts provided four baskets last year, to supplement those provided by the boys. This year, they offered to provide whatever was needed to meet the needs of House of Neighborly Service’s client base.

“They asked us to provide five this year, for a total of 45 baskets, but I think we’ll probably end up doing more,” said Rotar. “Whatever’s left over goes into their pantry for future use, and in our opinion there can never be too much.”

According to Rotar, the Girl Scouts chip in to help the Boy Scouts buy the turkeys, and join them to deliver the baskets the Tuesday morning before Thanksgiving.

According to Linda Hirsch, former manager of Berthoud’s House of Neighborly Service, the scouts’ commitment to providing Thanksgiving meals each year has truly been a game changer.

Hirsch said that, though the organization was always able to provide food during the holidays thanks to community donations, it was typically whatever was available. Thanks to the scouts, she said all clients can now look forward to a real Thanksgiving meal each year.

And Thanksgiving, maybe more than any other time of year, is when they seem to need it most. According to Hirsch, the organization’s average of 1,500 pounds of food given out each month doubles in November to over 3,000.

“The holidays start to approach and families realize, ‘We’ve gotten by so far but I don’t know how we’re going to get through the holidays,’” said Hirsch.

She said that, thanks to the generosity of the First Presbyterian Church administration, who has given the organization a place to meet for the past 25 years; the time commitment of a small group of volunteers, some of whom have served the organization for over a decade; and the dedication of the Berthoud scouting programs, those families have somewhere to turn. 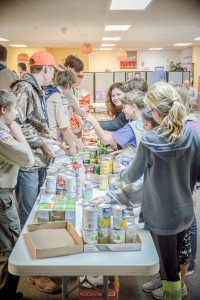 Members of local Boy Scouts and Girl Scouts troops prepare and seperate food items before making the Thanksgiving baskets Monday night. The group together made over 40 baskets that will provide a complete
Thanksgiving meal to local families.
John Gardner / The Surveyor

Scouts learn the value of giving

Brother and sister Tristan and Kenyan Clarkson have been involved with Berthoud scouting for a combined 14 years. Their family has contributed to the Thanksgiving baskets since the program began.

“My troop and I conduct a project where we build baskets full of food to give to the people in the community who usually can’t afford to buy it themselves,” said 14-year-old Tristan, a member of Troop 6. “During a scheduled troop meeting, the scouts get together and organize the food into each basket, then we hand them over to the House of Neighborly Service.”

Eleven-year-old Kenyan is one of nine girl scouts in Troop 700. Kenyan takes part in planning the food collection process by talking with the other girl scouts.

“Giving is a special feeling,” said Kenyan. “It’s even better if you help families in need have a better holiday.”

“The baskets play a very important role in making sure that every family who cannot afford a happy Thanksgiving themselves can get one because of the role of the community,” he said. “I feel that no matter what the circumstance, every family deserves to spend their holiday over a nice platter of turkey.”

For the Clarksons, scouting is about participating in service projects, experiencing new adventures and meeting new people.

Kenyan recently spent a weekend rock climbing at Garden of the Gods, and said learning new things and having fun are two reasons she loves being a Girl Scout.

For Tristan, after years of serving his community as a boy scout, the next chapter is nearly in sight.

“When I first joined Boy Scouts, I got to see peers leave and join, and also see some turn to an Eagle Scout,” he said. “It is a pleasure to have that dream of accomplishment to look forward to.”

This year is predicted to meet or exceed previous years for the amount of food provided to clients, According to Hirsch.

House of Neighborly Service in Berthoud provides an average of 32 meals per month to client families, but the organization is in the midst of its busiest season.

“August spikes because of our back-to-school programs, and it really doesn’t slow down through the end of the holiday season,” said Hirsch.

She said the organization does its best to meet the influx of needs this time of year, not only by providing a week’s worth of food each month to its income-based clientele, but by aiding with utilities, prescriptions, transportation, and school and holiday program costs as much as possible.

According to Hirsch, the scouts’ commitment to putting together meals in November allows the organization to utilize its resources elsewhere during this busy month, and ensures that one very great need is met.

“The scouting program provides a generous, delicious Thanksgiving meal for families who may not be able to provide such a complete meal any other way,” said Hirsch. “A lot of our families wouldn’t have a holiday meal without this program.”

For Sally, House of Neighborly Service has truly been a lifesaver.

“They provide so much more than food,” she said. “They helped me get new glasses when I was diagnosed with glaucoma. They’ve helped us with gas, clothes, housewares, even birthday cake mix on my birthday.”

She said the greatest need the organization fills isn’t tangible.

“The biggest thing that House of Neighborly Service gives me is love,” she said. “They care. They truly care. I thank God for them every day.”

With Thanksgiving approaching, Sally has added the Scouts to the list of organizations she’s grateful for. Thanks to their combined efforts with House of Neighborly Service, she and her husband will have something to celebrate this month.

“We received a basket from them last year, and from what I hear they’ve come through once again, so all I’ll have to buy is a pan for the turkey” she said. “This year our Thanksgiving will be wonderful thanks to them.”