While coronavirus threatened Colorado and the rest of the world, four of the animal babies born between February and May 2020 at the Denver Zoo delighted everyone with their antics, reminding everyone that life goes on and it can be a lot of fun.

Joona, a female Greater One-Horned Rhino (Rhinoceros unicornis), was born Feb. 2, 2020. These rhinos, native to Nepal and Northeastern India, are considered a vulnerable species. Hunted for sport or killed because they were considered agricultural pests, their numbers had dwindled to 200. Conservation efforts by the Indian and Nepalese wildlife authorities brought them back from the brink of extinction, and now there are approximately 3,700 of them in the wild. 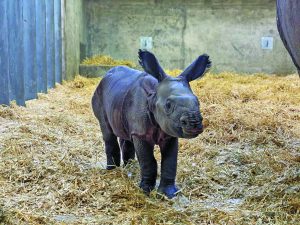 “Joona is Denver Zoo’s first-ever greater-one horned rhino calf. We had attempted artificial insemination on her mom, Tensing, 11 times before it was successful. Sixteen months later, we welcomed Joona to Denver Zoo,” said Rhino Keeper Christine Bobko. “There are fewer than 100 of this species in North American zoos, and this effort took three different zoos and several experts to make happen. As a keeper for nearly 30 years, this was hands-down the proudest moment of my career.”

Bobko has a special relationship with Joona. “I’ve worked with rhinos almost my entire career, they really make you work for their trust and affection, and to be able to work with a rhino from birth has been such a gratifying experience,” she said. “Joona was born with a big personality that’s only grown in the last 10 months. She’s sassy, she’s fun, but she’s also so sweet.”

When Joona was two months old and the Zoo could not yet have visitors return, Zoo officials decided to raise money by having an online naming contest for the baby rhino. “Joona,” which means “joyful” in Nepalese culture, won. The Zoo raised $39,000 and donated $5,000 of it to the International Rhino Foundation that helps rhinos in the wild.

African lions are native to most countries of sub-Saharan Africa, and live primarily in eastern and southern Africa. They live in groups called prides, family uni 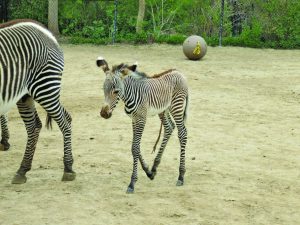 ts of two to 40 lions. Lions are vulnerable to extinction, and the International Union for the Conservation of Nature estimates fewer than 25,000 lions remain in Africa. This is about half of how many there were about 25 years ago.

“These cubs are Kamara’s first litter, and it was fascinating to watch her quickly adapt to a new role as ‘mom,'” said Matt Lenyo, Assistant Curator of Predators. “Each new cub that is born at Denver Zoo has such a unique personality, and their impact on the pride is different. One might be more adventurous, willing to check out new spaces and new enrichment, while the other will be more laid back, relaxed and wait for adventure to come to them. It’s so fun watching them grow into these personalities and create new dynamics in the pride.”

The long-legged Grevy’s zebra is the largest of the wild zebras. Their unique stripes are as distinctive as human fingerprints.

They are native to parts of Kenya and Ethiopia. Juveniles have a low survival rate. Hunting and habitat loss has reduced the species’ numbers by 54% over the last 30 years, and only about 2,800 remain in the wild.

“Sometimes what makes a birth unique is how uneventful it is, we’re just happy when mom can go through the process without any help from us, and the result was a very bouncy baby boy,” said Jesse Knoll, Hook stock Keeper. “I’m relatively new to the Denver Zookeeper team, and Kylo is my first calf here so that in itself is special. But watching him learn the ways of the herd, gaining independence, his playfulness, it’s all really special. Especially during times of COVID, it’s nice to have something so pure and positive here.” 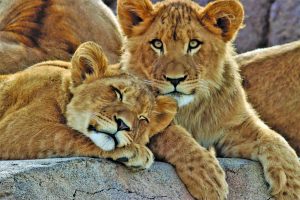 The Denver Zoo is open to visitors and its annual Zoo Lights will be illuminating the night scene there until Jan. 9, 2021.

As the Zoo continues to face the impacts of COVID-19, their team of animal care and nutrition specialists is working hard to provide nutritious meals to every one of the approximately 3,000 animals in their care. With an annual grocery bill of over $1 million ($83,000 per month), they are asking for the support of the community to donate any amount they can to help.

Please visit the Zoo at https://denverzoo.org/support/zootrition/ if you can help.