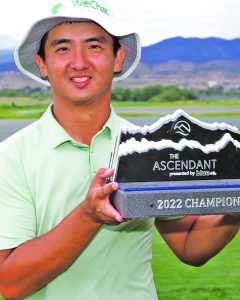 Photo by PGA media – Zecheng Dou hoists the championship trophy after winning the Ascendant presented by Blue at TPC Colorado in Berthoud on Sunday afternoon.

Zecheng Dou, the native of mainland China who won the Ascendant presented by Blue at TPC Colorado in Berthoud this past weekend took home quite the bounty – the gorgeous championship trophy depicting the Front Range peaks which serve as the backdrop for the course, a $135,000 check and a set Adirondack ski chairs – but the biggest prize from the weekend was his PGA Tour card, which Sunday’s win assured.

Dou entered the week ranked No. 369 in the world rankings but at No 19 on the Korn Ferry Tour points list. The win on Sunday gave Dou 500 points to get him to 1,207, which guarantees he will finish the year in the top-25 to earn his PGA Tour card. He currently sits at No. 2, behind only friend and fellow Chinese native Carl Yuan, who coincidentally finished in second place on Sunday and helped Dou celebrate with a splash of water after the pair completed the 18th hole.

“Just more prepared,” Dou said in the post-round press conference when asked about his of his return to the PGA Tour next season. “My game is every bit more solid than before. Hitting it longer, irons are better. Just putting today, gave away a couple putts, but still shot 17-under. I just feel more confident in every situation, leading or a couple behind. I know I can play good.”

Dou shot a cumulative 17-under, with all four rounds under 70 (69-67-68-67), to break the tournament record set last year by champion Tad Ridings. He was in control all day after entering in a three-way tie for the lead alongside Ryan McCormick and Dawson Armstrong and held off multiple charges from other players on the leaderboard to remain in control throughout the final 18 holes.

Tournament officials elected to move Sunday’s tee times up by about three hours to avoid afternoon thunderstorms that were forecast, and proven correctly forecasted, for the afternoon. The earlier start meant for ideal conditions throughout. Dou made birdies on the fifth and ninth holes to make the turn at 34 and would card four more birdies on the back nine, including back-to-back on the 15th and 16th holes to take sole possession of the lead.

Dou had to scramble on 17, however, but landed his third shot on the par-4 within just a few feet of the cup and rolled to save par and hold onto his lead. He did find the fairway bunker on 18 and sailed his approach shot to the back edge of the green. Yet Yuan missed his par putt and each would go on to make bogey, Dou’s only one of the round, to win by a single stroke.

“I always like the crowd following me, and I like that pressure and hanging in there. Stayed focused,

and everything went pretty well,’ Dou said. “I shouldn’t be scared of anything. If there’s anybody more nervous, it’s not me. I should be the one that’s relaxed because I know I have a better chance of playing good.”

It has been a winding road for Dou throughout his career. While only 25 years old, his previous stint on the PGA Tour, which he earned in 2017 to become the first Chinese-born player to the reach the PGA Tour, ended in disappointment as he made only four cuts in 23 events played, not enough to retain his tour card for the following and returned to the Korn Ferry Tour (then known as the Web.com Tour).

In 2019, Dou earned a victory at the season-opener played in The Bahamas and, while he finished just shy of the top-25 in the final Korn Ferry Tour standings, he did perform well enough to earn exempt status for 2020-21, taking off some pressure and providing a needed confidence boost; Dou claimed after Sunday’s round that the win 2019 was critically important to getting back on the PGA.

Dou believes his return to the PGA will be different this time around, stating he believes he is far more prepared both mentally and physically for what is the world’s premier professional golf league. ‘I think my physical wasn’t as good as this year because I have more weight now, and my mental is better. That year it was just it could be something like after a win I feel like there’s no pressure and stuff. But this year I learned a little bit from that year, as well, definitely. I do feel like all parts of my game are set for the big Tour. Looking at Collin (Morikawa), Scottie (Scheffler) out there winning those events, it makes me hungry to want to go out there and compete with them.”

While Dou’s win was the headline, for the fourth time in as many years, the event itself and the job TPC Colorado did serving as host once again well-received by the tens of thousands of spectators who came through the turnstiles over the four-day event. What has to be the biggest event annual in Berthoud was once again aided by a large throng, over 600, volunteers who worked with club and tournament officials to keep things running smoothly.