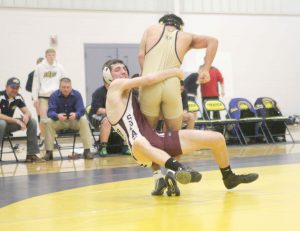 Berthoud’s Matt Bonds takes down his Olathe competitor on Jan. 9. Despite
putting up a good fight, the Spartans lost the dual 33-29.
Karen Fate / The Surveyor

The Berthoud wrestling team returned to action Jan. 8, battling the Roosevelt Rough Riders in a dual at Berthoud. The Spartans won the dual 42 to 19, winning nine matches and losing four. Conner Balliet started the evening off for the Spartans at 182 pounds with a pin. Sebastian Gonzales, Jimmy Fate, and Chad Ellis all contributed to the victory with pins over their opponents. Matt Bailey won on a technical fall; Collin Leypold, Matt Bonds, Devin Vise and Ben Poirier all won by decisions, contributing to the lopsided Spartan win.

On Jan. 9 the Spartans traveled to the western slope to face Olathe in a dual and then participate in the Indian Invitational on Jan. 10.

The Olathe Dual started out well for the Spartans as they took an early 23 to 3 lead after the first five matches. Matt Bailey, Kyler Bailey and Bonds all chalked up wins, while Michael Creager received a forfeit, which put the Spartans out in front of Olathe early.

At 138 pounds, Berthoud’s AJ Black faced no. 8-ranked Trent Rose. Black put on an outstanding performance taking Rose to overtime, but ultimately losing a close match 6 to 4 after four periods.

Berthoud’s Jimmy Fate continued his winning ways by pinning no. 3-ranked Austin Shank to put the Spartans up 29-6. The momentum then shifted to Olathe, and the rest of the night did not go well for the Spartans.

Berthoud’s Chad Ellis shifted up a weight class to 182 pounds to take on no. 4-ranked Chayden Harris. Giving up 13 pounds, Ellis wrestled a tough match against his larger opponent, losing by a narrow 16-15 margin. The Spartans ended up losing to Olathe by a score of 29 to 33.

On Jan. 10, the Spartans participated in the Montrose Indian Invitational wrestling tournament. Competition was again tough, with 14 teams participating, including top-ranked 2A Paonia, no. 3-ranked 4A Pueblo County, and 5A Ralston Valley. The Spartans finished the tournament in fifth place, only one point behind fourth-place Olathe. Paonia, Pueblo County and Ralston Valley finished first, second and third. The Spartans put six wrestlers into the finals round with three wrestling for the championship and three wrestling for third place.

Fate won the 145 pound championship, winning in the finals on a forfeit over Olathe’s Austin Shank. Fate kept his undefeated streak intact by winning two matches by pin for a three-win day. Poirier finished second at 160 pounds, losing a close championship match 2-3 to Paonia’s Zach Milner. Poirier finished with a 3-and-1 record, recording one pin.

At 126 pounds, Berthoud’s Kyler Bailey met up with 2A’s top-ranked Jesse Reed of Paonia. Bailey ended up losing to Reed in a close match 4-7 in the second round. He went on to a 4-1 record for the day that included four pins.

The Colorado High School Athletic Association allows only five matches to be contested in one day, so Bailey had to settle for fourth place after having lost a coin toss to determine the third-place winner.

Bonds had a strong showing, finishing fourth at 132 pounds but losing his final match 4-11 to no.7-ranked Levi Gross of Cortez. Bonds finished the day with a 2-2 record, including one pin.

Ellis finished the tournament in third place at 170 pounds. Ellis lost a close last-second match in the semi-finals 3-4 to Garcia of Pueblo County. He came back to place third, pinning Alameda’s Zak McMillon in the third-place match. Ellis finished the day 4-1 with three pins.

Collin Leypold contributed to the Spartans’ team points, winning two matches, however, he did not place.