Wine country is right around the corner at Blue Mountain Vineyard

A short seven-mile drive from downtown Berthoud is a vineyard surrounded by three-and-a-half acres of gardens, a lake, and a stunning view of the mountains. Blue Mountain Vineyard, located at 4480 Hoot Owl Dr., is a labor of love for owners Bill and Christie Prewitt, who have been cultivating their property for over a decade. 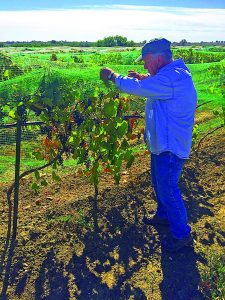 Bill Prewitt owner of Blue Mountain Vineyard lifts up a shroud covering his grapes the day before the harvest on September 23, 2017. Wine tastings and garden tours are available at the property and can be scheduled by calling 970-480-7778 or by visiting coloradobluemountain.com/tastings

Bill, a Wisconsin native and a Vietnam veteran, came back to the states after serving his country and was refused service at a bar in Seattle, as he was only 20 at the time. “That forms a big chip on a young man’s shoulder,” Bill said. That experience was the catalyst for a life-long pursuit and eventual career in the wine industry that began with Bill teaching himself how to make his own wine from the prolific blackberries that grew around Seattle.

Bill and Christie met soon after and were married. When Bill left the military he went on to attend the University of Wisconsin, obtaining a degree in microbiology with a concentration in biochemistry and organic chemistry. After a successful career in the wine industry, he retired 13 years ago, having already begun to develop his own vineyard on his and Christie’s property in Berthoud.

The property that used to be pasture land has been transformed into a beautiful and serene escape from the noise and hustle of everyday life. Blue Mountain includes over five acres of vineyards and a recently-expanded tasting room with ample seating and a cozy fireplace.

Visiting the winery is an education as much as it’s enjoyable. Bill personally presents his visitors with a wide variety of wines to taste, discussing each and answering questions about the individual wines and the art of producing them. “We suggest people bring hors d’oeuvres to enjoy while they taste,” he said. Comfortable walking shoes are also suggested, as a garden tour follows the tasting.

Two popular specialty items Blue Mountain offers can only be purchased at the many farmers’ markets, festivals and events at which Blue Mountain sells their products, or by visiting the winery. Christie’s Blend is a port-style dessert wine that is aged for six years in French oak barrels. It’s described as having deep flavors of chocolate, raisins and smoky bourbon. Then there is Harvest Gold, which Bill says sells out very quickly, as it’s become well known for its unique characteristics. He described Harvest Gold as smelling like cascade hops, “you’ll swear you’re having an IPA, but when you drink it it’ll taste like pineapples and apples.”

The venture has come a long way since its beginnings 11 years ago this November. “This was all nothing but a field of yucca, rabbit brush and cactus,” Bill said of the now manicured and picturesque property. The venue has also expanded into hosting events and weddings.

While Bill oversees the vineyard, the gardens are the handiwork of Christie. “Originally this was just going to be shrubs and I got a little carried away,” she said of the many paths and ever evolving gardens that wind through the grounds. “Most of the trees were throw-away trees from a nursery Christie worked at, and most of them we called Charlie Brown trees when we first got them,” Bill said of the now flourishing plants, a testament to Christie’s green-thumb. A wonderful assortment of trees, shrubs and flowers have a place here, including Weeping Redbuds, Sumac, Norway Maple, Weeping Alaskan Cedar, Black Elder, Wisteria, Asters, Dahlias, Trumpet Vine and Hibiscus, to name a few. The gardens bloom between May and October, but the couple both agreed many guests who visit during the winter months still enjoy the quiet of a sunny winter day in the gardens, the beauty of the lake and, of course, the stunning mountain views.

It takes a lot of hard work to accomplish what Blue Mountain does. Bill explained red wines, for example, require around 100 pounds of grapes to produce 58 pounds of wine, and a bottle of wine is around 1.66 pounds. The wine business has its ups and downs and, as anyone in agriculture will attest, the extremes of Colorado can be challenging. Bill commented on this with a chuckle, “You have to be crazy to grow grapes here.” This year frost hit the vineyard hard, reducing the white harvest to around 15 percent of previous years. In this soil you’re more likely to find fossils than grapes, and wildlife also adds to the challenge. But, despite all the obstacles, when asked why he does it Bill said, “This is definitely a passion. I just really enjoy it and I love meeting the people who come here.”

Wine tasting is $10 per person and can be scheduled online by visiting coloradobluemountain.com or by calling the winery directly at 970-480-7778. Groups of 30 or more people can be accommodated and will have separate pricing. Blue Mountain vineyard products can be purchased at many local stores, including Berthoud Wine & Spirits and Hometown Liquors.