“Winchester” is frightening to few

There is perhaps no other image as dreadful or frightening, and as closely associated with the thought of horror, as a good old-fashioned haunted house. These creepy structures have been the source of legends in literature since the age of time. Authors such as Stephen King made a fortune off the concept of a haunted building.

Thereupon, the new supernatural film “Winchester,” which stars Helen Mirren, is nothing new in the world of horror. 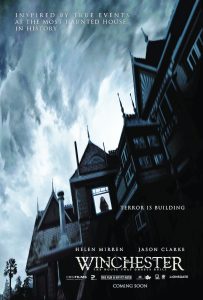 The film explains that Sarah, who also lost her daughter, is struck with nagging grief and therefore decides to spend her more than $20 million inheritance on a seemingly never-ending mansion in California.

It is true Sarah did indeed build the estate (later named the Winchester Mystery House) and from its inception many claimed it was haunted by ghosts of those killed by Winchester rifles. It is also true Sarah never had a master floor plan for the mansion, instead opting to build “from-the-ground-up” with construction that proceeded nearly around the clock until her own passing in 1922; at which time the building immediately ceased.

If that isn’t creepy I’m not sure what is. What is not so creepy, however, is the film based on its story.

Gifted with one of the best storylines in the horror genre in quite some time, “Winchester” shoots rounds and rounds of disappointment, especially when also blessed with one of the more acclaimed actresses to star in a supernatural project. Mirren goes through the motions of a script that fails to really dive into the complicated, troubled woman it portrays.

Jason Clarke, meanwhile, supports Mirren in the film as Doctor Eric Price – a man hired to the estate in order to evaluate Winchester’s mental clarity. He is equally dutiful wandering around the mansion’s endless rooms doing his best to put on a scared face while potentially mulling inside – “This is it? This is all we could come up with?”

Sure, “Winchester” has plenty of disturbing ghosts that slice in and out of the frame quickly (known in the industry as a jump scare) yet it becomes so repetitive after a while even that isn’t too terrifying, and this is coming from someone who is admittedly not a big fan of horror films in the first place due to their shock-value.

“Winchester” will have its moments that elevate you out of your seat cushion, but like most films that receive a negative rating, it’s not because they initially set out to be terrible, the execution just wasn’t there.

Near the conclusion “Winchester” tries to send a message that we should care. The audience doesn’t. Meanwhile, fans of the horror/supernatural genre will have to cross their fingers for the upcoming fright-fest, “A Quiet Place.”