Who is that lady with the red nose?

The magic is still there.  You can feel it the minute Lloyd Mobley starts talking about Linda, his wife of 52 years, from their how-we-met story to their days as a Magic/Comedy duo, to the present how-we-are-faring. His voice brims with energy. His eyes sparkle. Linda smiles and nods her head excitedly when he talks. 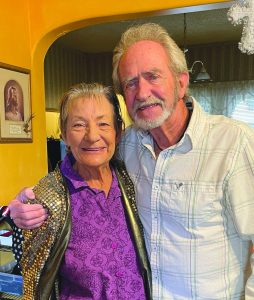 “Covid and age kind of stopped the show. I keep busy though. Grubhub, DoorDash. I like to get out. Linda comes along on some of the drives.”

The last time he drove alone for an extended time was in 1969 when he drove an old car out from California to visit a friend in Denver. The car broke down. He needed money so he took a job at Azar’s Big Boy—the iconic restaurant chain known for its trademark smiling boy with big hair, checkered overalls and a double-cheeseburger hoisted high. There he met Linda’s twin sister. Whether she saw a possible match wasn’t clear, but she called Linda who still lived in their hometown of Alamosa and told her to come to Denver and work with her.

“I come from a family of waitresses,” Linda said. Eight children, a single mother. She was no stranger to hard times or hard work. She moved to Denver and joined her sister (and Lloyd) at Big Boy where she often worked until 2 a.m. “I had to walk home alone at that time. All I was worried about was that someone might steal my tips, but nothing ever happened.”

Nothing except she fell hard for Lloyd. And he for her.

It was a fast-acting glue that held them together. Six months after meeting, they traveled back to California. “I loved his entire family. Nicest people,” Linda said. They married at Lloyd’s family home.

Big Boy restaurants were everywhere back then. Lloyd returned to one in California. “I went from cook to manager to having my own store.” The restaurant life was good and when it came time to return to Colorado in 1974 and spend time amongst Linda’s large clan, Lloyd bought a Burger Baron franchise in Alamosa and a new adventure began. When that chapter ended another started in 1980 when they sold their home and moved to Oregon where more of Lloyd’s family lived.

“I went from restaurants to car sales to owning a photography business,” Lloyd said, of their 17 years spent in Oregon.

“I went from having two children, to watching 10 more,” said Linda. “I fed them, played with them. I love kids. They’re my heart!” Still, she found time to help Lloyd with the photography studio. They did weddings and other events. They both agreed. Making people smile made them happy.

All the while, Lloyd dabbled in magic. “Always liked it. From a kid on.”

When they moved for the final time back to Colorado in ‘97, he dabbled a little deeper. “I met other magicians in Fort Collins at IBM.” Not that IBM. The International Brotherhood of Magicians. A quick learner, Lloyd soon had enough tricks for his own act. But not without Linda. Table tricks at Texas Roadhouse led to a dinner theater act in Longmont. In 2002 they booked shows at the Rialto. People hired them for birthdays and corporate events. Lloydini and Linda.

They were illusionists. White doves, silver coins appeared out of nowhere and disappeared. There were card tricks and the swords in a box with a lady (Linda) inside. Their favorite stunt was a Houdini-type escape from a locked box. “People loved it. Oh, they laughed.” Linda said, a big smile on her face.

“It was addicting. All that applause, all that attention. We miss it,” Lloyd said.

He tries to recreate it in smaller ways these days. Before I left, he pulled out a clasp from a small purse. Only the clasp. The purse was missing. He opened the clasp and pulled out a coin from thin air. There. A good laugh.

Whether you know it or not, you’ve likely met Linda. She often takes a stroll about town donning a bright red nose. She’s worn many hats in her life but never was a clown. She’s not trying to be one now. With a sweet smile, a squeeze of the nose, a wave of her hand, she’s trying to connect, spread some joy. So folks, wave back, smile, clap your hands. Help her complete the circuit. And if you meet Lloyd, don’t be surprised if a coin drops out of your ear.