Berthoud Elementary School parent Kelly Seaton wants to make sure the students there safely cross the street, though her own three children ride the bus. 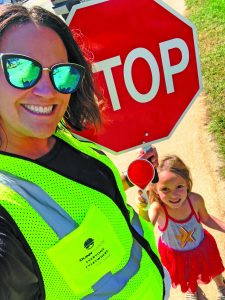 “The biggest benefit is knowing that all the kids are getting a truly safe passage to school,” said Seaton, volunteer-crossing guard coordinator for Berthoud Elementary School. “They have one person they can count on every day to get them there and get them there with a smile.”

In late August Seaton became aware of the need for crossing guards when her children were late for the bus and she took them to school. She saw drivers driving into the crosswalk while children were present and, in response, arrived at the school the next day with a reflective vest. She realized she needed to make her effort more official and contacted the school district, which provides crossing guards with training in crossing-guard safety and the equipment and gear they need, such as stop paddles and reflective vests.

“We’ve needed crossing guards consistently,” Seaton said, adding that at Ivy Stockwell Elementary School there already is a crosswalk in front of the building, covered by a staff member.

Volunteer crossing guards receive training through the Safe Routes to School program, which was created by the Colorado Department of Transportation (CDOT) to make it safer for students to walk and bike to school. CDOT provides federal funding to local government and law enforcement and other agencies that want to develop or improve safe school routes for students in grades K-8 through program and infrastructure grants. The program grants can be used for education and crossing-guard programs, while the infrastructure grants cover street and sidewalk improvements and the painting of crosswalks.

Thompson School District received a SRTS grant for sidewalk infrastructure at Ponderosa Elementary School to begin work in July 2019 from the school to the neighborhood to the west. The district will submit a second grant application for the Town of Berthoud to fill in sidewalk gaps in downtown and will be notified if it receives the award in March 2019. Work then can begin in the 2019-20 school year, with three years to finish.

Thompson School District has both paid crossing guards through the city of Loveland, as well as volunteer crossing guards, but currently does not have a SRTS grant for programming.

This school year the district has 12 paid crossing guards, plus several volunteers, said Mechelle Matz-Mayfield, Safe Routes to School coordinator for Thompson School District. The crossing guards are placed at schools based on safety and on how many students cross intersections near the school (which do not have push-button cross walks) and the number of vehicles going through those intersections.

“The volunteer program comes up when we have concerns around the school specifically,” said Matz-Mayfield, who oversees the training portion of the crossing-guards program. “It’s up to the school if they need it.”

Crossing-guard volunteers, who must pass a background check, become officially certified as crossing guards once they watch a video on crossing-guard rules and etiquette, review the Adult School Crossing Guard Guidelines manual provided by CDOT, and pass a short exam on the materials they received. If they become volunteers their duties include guiding children into the crosswalk after they raise their stop paddles and waiting until the last child crosses, while remaining standing the whole time, without actually directing traffic.

Ideally, Seaton would like to have three volunteer crossing guards work the morning and another three work the afternoon shifts. The shifts are 7:30-8:30 a.m. Monday, Tuesday, Thursday and Friday, 8:30-9:30 a.m. Wednesday, and 2:40-3:40 Monday to Friday.

So far 10 volunteers have applied and five have been approved, but more are needed. She offered to oversee efforts at the other Berthoud K-8 schools at Ivy Stockwell and Turner Middle School if they are interested or to bring in other volunteer coordinators.

“This program stems from me hearing the cry from parents of why don’t we have crossing guards, just showing up and starting it and making it happen,” Seaton said.