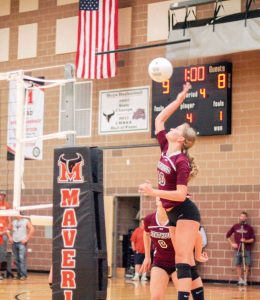 The Spartans volleyball team dominated the Skyline Falcons in three sets, winning the first home conference match on Sept. 4. It was an emotional evening where every player laid their heart on the court, working to overcome controversial calls and a familiar opponent.

“That was so stressful. I was nervous and Will’s (Rozum, Skyline head coach) always going to be a secret rival since he coached here,” said head coach Daisha Agho.

Overall, she was very happy with the team’s performance.

“There are definitely things that we’ve got to refine,” Agho said. “It’s still early, which is good.”

The team was in sync the first set, leading 24-11, before they allowed Skyline a run of six points, finally closing the door on the match 25-16. Set two had the teams neck-and-neck up to 17, at which point the Spartans pulled away to win 25-19.

The Falcons were ahead in the third match 22-20 until Berthoud sophomore Sarah Howard came in to serve, giving the last five points of the night to Berthoud for the win – 25-22.

“It was a confidence booster for the entire team when we put Sarah in to serve,” Agho said. “Knowing that she could come in and help us out there, that was a huge deal.”

The freshman right side, Julie Ward, has blended seamlessly with the team. “Her game was on. As a freshman, I’m very impressed with her maturity already. If there were any doubts of her being on the varsity team, she’s squashed them by now,” said Agho.

The lady Spartans played again on Sept. 6 at the Lewis-Palmer Varsity Tournament. The first match of the day had a slow start, losing the first set against Pueblo West 25-16. The next two sets were a battle. Alyssa Peacock, Haley Hummel and Hannah Atkinson had huge digs on the Cyclones, along with decisive kills from the whole front line. Spartans won 25-23, but lost the tie breaker 19-17, which had four service errors from both teams on game point.

Berthoud lost the next match in two sets, 27-29 and 25-19 to Montrose, then won in three sets over Coal Ridge (New Castle) 25-19, 19-25 and 15-13. They ended up third in pool play, seeding them seventh for the championship round where they met up with conference rival and eighth seed Roosevelt. Knowing that the match could be difficult, the Spartans were anxious and hopeful. They shined against Roosevelt, beating them 25-21 and 25-17, a win that earned them seventh place in the 12-team tournament.

The ladies played tough and focused all day. It’s clear that they enjoy playing for each other.

“When I hit a perfect set into the net, Jessa [Megenhardt] would encourage me, ‘Be ready, the next one’s coming to you and you’re going to put it down!” said Atkinson.

“We were pretty even the first set at 15-15, and it was game over from there,” head coach Agho said. “They weren’t focused for the rest of the game. They were playing scared-not-to-lose. So they fixed that in game three. If they can play game three over again when they come to our place, it will be a different outcome.”

Middle Madi White put the ball down on the Mustangs with four big blocks. Alyssa Peacock and Shaylee Pierick had three a piece.

“We were able to block on the outside pretty well,” said Agho. “Their outside hitter was getting pretty frustrated in game three and game four, especially in game four. Little things like that when we can get to the other team, we’ll take it.”

Ten of the 14 blocks by the Spartans were in the third and fourth sets.

Setter Jessa Megenhardt caught the Mustangs off guard in the third and fourth sets with four left-handed kills on the second touch while playing right side. The Mustangs celebrated when they were finally able to pick one up.

“We actually talked about finding other options when she had two hitters to diversify the offense a little bit because Mead was blocking on the left side,” said assistant coach Mil Santos. Megenhardt also set it to the right back when the defense was expecting it on the left.

“I just had her making it more diverse even though the passes are not always going to be there. [She] either set it up — a two, or three, or four — she was able to make that adjustment to the right back player to get at least a side out.”